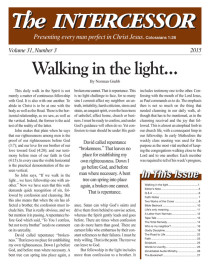 I recently heard a quote from famous NFL Football legend Johnny Unitas: “A man never gets to his station in life without being helped, aided, shoved, pushed and prodded to do better.”

I don’t know about you but I immediately related to this quote. It’s certainly been my experience in life, and especially my Christian life. I’ve had a number of friends and people who have gone out of their way to help me, looking out for my best interest and spiritual well-being. Countless times I have received help and been aided but on many occasions I’m sorry to say I have needed to be more forcefully shoved, pushed and prodded. Another way I would describe this iscorrected and / or disciplined.

In scripture we are told repeatedly that God disciplines those He loves (Hebrews 12:6)

Because the Lord disciplines the one he loves, and he chastens everyone he accepts as his son;
Deuteronomy 8:5

Know then in your heart that as a man disciplines his son, so the Lord your God disciplines you;
Psalms 94:12

Because the Lord disciplines those he loves, as a father the son he delights in;
Revelation 3:19

Those whom I love I rebuke and discipline. So be earnest and repent;

Whilst discipline seems unpleasant at the time and often we resist, actually we should be thankful, and take a moment to realise that proper discipline is proof of God’s love for us, His children.

Recently I was reading in the book of Philippians and for me, one of the best biblical role models we find in this area of providing correction is Paul. In Philippians Paul outlines how we should live, walk and how our attitude should be toward one another. So many of Paul’s letters demonstrate how he constantly looked out for the interests of others, and he instructs us accordingly in Phil 2:3-4: Do nothing out of selfish ambition or vain conceit. Rather, in humility value others above yourselves, not looking to your own interests but each of you to the interests of the others.

Paul never compromised his message when preaching to the lost or encouraging or rebuking his fellow brothers and sisters. It would have been easy to take the softly-softly approach but he never hesitated to shove, push and speak to anyone about sin, unbelief, and provide correction where he saw a need. And we should be the same.

He did so because he firmly understood the standard which God requires and which Jesus speaks of in Matthew 5:48 we are to be perfect, as your heavenly Father is perfect. We are also told plainly that God expects us to live holy lives (1 Pet 1:15-16: But just as he who called you is holy, so be holy in all you do; for it is written: “Be holy, because I am holy).

Paul knew what was at stake. Ultimately God’s final judgement will come to pass. As the psalmist writes “My flesh trembles for fear of you and I am afraid of your judgements” Psalm 119:120. And, in the end, every idle word spoken and secret thing will be brought out into the light (Ecc 12:14).

Thankfully Paul saw it as his calling and responsibility to push and shove his church members when necessary. In this sense he was a true brother and friend to them. Paul loved his fellow brethren and did not want any of them to perish. In fact, I would say that Paul agonized over them, oftentimes putting their welfare and interest ahead of his own. He walked his own talk.

But as we know there was a cost to Paul in pouring himself out for others like this. Many people did not want to hear the truth from him and did not want to repent. Instead, they reacted negatively and often violently toward him. To list just a few examples:

Remarkably, Paul is undeterred by all of this and had a Godly fear about things which truly mattered. He continued to chastise and did not fear those who kill the body but cannot kill the soul (as Christ says in Matthew 10:28).

At a deeper level what we actually see going on in Paul is Love; the self-sacrificing / Agape love. And the Bible tells us clearly that God IS Love! (1 John 4:8). God’s spirit abided in Paul just as it does in those of us who are believers so this is our reassurance and calling to love one another as Christians in this way (1 John 4:-11:12  Beloved, if God so loved us, we also ought to love one another. No one has seen God at any time. If we love one another, God abides in us and His love is perfected in us.

I believe this is also our calling, to imitate Paul’s lead which is the same attitude, mind-set and actions of Christ “I am the good shepherd; the good shepherd lays down his life for the sheep (John 10:11). And just as a shepherd may use a crook to recover a fallen animal, often the only way to save them is ensnaring them by the neck or leg. It may seem unpleasant at the time but often it’s necessary and the only way to rescue the sheep.

END_OF_DOCUMENT_TOKEN_TO_BE_REPLACED

Words to Live by is a weekly devotional email of Scriptures and quotes that highlight and expound upon our Union with Christ. If you'd like to receive devotionals like the one below, please subscribe using this link. Wednesday January 18, 2023 Spontaneous Living "We can listen to the law, know ... END_OF_DOCUMENT_TOKEN_TO_BE_REPLACED