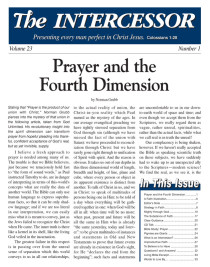 Strategy in Faith
by Norman Grubb

In earthly warfare, Norman states, no battle is won right up at the front line-but back at general headquarters where the winning strategy is first hashed out. Using the biblical account of King Jehoshaphat, Norman shows us how we can find God’s winning strategy and emerge victorious in our spiritual battles.

See Jehoshaphat, king of Judah, when he was suddenly attacked by a confederacy of enemies, Ammonites, Edomites, Moabites. They were on him without warning. The first he knew was that they were only thirty miles from the capital. Common sense would say: "Mobilize, rush out and stop them"; yet with little hope, for they vastly outnumbered him and were prepared for battle. But Jehoshaphat knew the secret of the spiritual strategist. Don’t rush out. Rush in. Go to the Commander-in–Chief. Have it out with Him. Get His outlook and orders.

Jehoshaphat was human. He feared, the record says. Quite right, quite normal. Necessary, in fact, for fear is faith in reverse; and faith, once roused to believe the worst, can be reversed to believe the opposite. Paul feared when he came to Corinth after his rough handling in Philippi and Thessalonica; but he converted his fear into a boomerang and made it the driving force of a greater deter-mination than ever before to preach none other "save Jesus Christ, and Him crucified" (1 Cor. 2:2, 3). Even Jesus feared, but the fear aroused "strong crying and tears", and the crying an overcoming faith. He "was heard in that He feared" (Heb. 5:7).

Jehoshaphat also used his fear aright. He did not allow it to give him spiritual paralysis by flooding his mind with counsels of panic and exhausting his energies on futile preparations. He did not allow it to hold him a captive in the power of appearances. He took the way by which the panic-stricken soul struggles up from the grim dungeon of satanic threats to the bracing high-lands of God’s deliverances, from the cry of terror to the laugh of faith, from shoulders bowed beneath the load of care to bruising the enemy beneath the feet. He called the nation to a day of fasting and prayer. Not to front-line action, but to staff consultations. It was the strategist at work; the day of tactics had not yet come. It was the general calling his staff together to meet the threat of invasion.

But now note the contents of his prayer which the record quotes in full (2 Cor. 20:1-30). He did not reach his specific request until the last sen-tence. All the rest was asking obvious questions of God, the affirmative answer to each of which was equally obvious. "Art not Thou God in heav-en?" "Rulest not Thou over all?" "In Thine hand is there not power and might so that none is able to with-stand Thee?" Then, a little closer home: "Art not Thou our God Who didst drive out the inhabitants of this land before thy people Israel, and gavest it to the seed of Abraham Thy friend for ever?" "And didst Thou not say that if, when evil cometh, we cry unto Thee, Thou wilt hear and help?"

What was Jehoshaphat really doing? Not persuading God, but him-self! Piling up in his own mind in God’s presence an overwhelming weight of evidence that God had given him a right to appeal to Him in this case. Finding, in fact, a foothold for faith. And that brings us to the real roots of effectual prayer. It comes from God first to me, and then back from me to God. It is God who has purpose to fulfill, in the destruc-tion of the devil’s work, in shewing forth His glory and grace to men; it is God who permits this or that experi-ence to come to us: and then, if we will listen, it is God who tells us how He will glorify His Name and con-found the devil by getting us out of it. We may appear to be crying to Him to deliver; but what really is happening is that, as we reason and plead and present His promises to Him, the Spirit is getting through to us and conveying to us the sure fact that God has long ago planned the answer. He knows what we have need of before we ask. He responds before we call. In other words, while we are busy persuading God, in real-ity He is persuading us! For what He wants is our faith; but faith is not eas-ily attained in times of stress and bewilderment, for faith is hearing God’s voice and believing Him, and the troubled mind may need to pour itself out with many a groan and a tear and struggle, before it is in a fit condition of release to hear that ever-speaking voice.

So Jehoshaphat "set himself to seek the Lord," separated himself by fasting from all that would distract, publicly reasoned with God as to why He should help, and with a final admission of helplessness and bewil-derment, asked God to work.

The rest now followed just in the way we would expect, resulting in a mighty national exploit of faith. Up arose a prophet who assured the king and people by the word of the Lord that there was no need to fear or fight in this battle; they were just to march out tomorrow, stand still when they came in sight of the enemy, and see the Lord’s salvation. (Prophets were God’s messengers in those days, because the Spirit and the Word were not yet given to the Church.) But such a word would have been to Jehoshaphat as the voice of one who mocked, if his heart had not been first prepared to take it. By now, by fearing and fasting, reasoning and groaning, the soil was ploughed up ready to receive the seed of faith.

King and people accepted, wor-shipped, prayed. Then, next morning (what sort of a night does a man have who has already believed in a crisis?), Jehoshaphat spoke out the word of faith. The mountain top was reached. "Hear me, O Judah, and ye inhabi-tants of Jerusalem; believe in the Lord your God, so shall ye be estab-lished; believe His prophets (His Word), so shall ye prosper." And so complete was his faith it had reached the laughing stage, and in place of setting the battle in array, he proposed sending forward a choir! And so intoxicated with faith were the people that they agreed. Was there ever such a marching out to battle?

The end is well known. How, as Judah sang and praised, the three armies got fighting among themselves, till they had completely destroyed each other; and how, when Judah arrived, they found them all "dead bodies fallen to the earth," and it took them three days to gather the spoil.

Upon what did it all hang? Upon Jehoshaphat giving time to get God’s mind upon it. Without this, such fan-tastic behaviour could never have entered the mind of a level-headed ruler. With it, a glorious victory was won without a casualty.

Look at the great crises of faith in the Bible, and the same two facts are constantly outstanding; first, a period of preliminary consultation with God, a staff-meeting away from the firing line; then, a sweeping victory with remarkably small output of energy or loss of life. See Moses at the Red Sea, Joshua at Jordan, Joshua at Jericho, Jonathan and the Philistines, David and Goliath, David at Ziklag, Hezekiah and the Assyrians, Paul and the shipwreck.

Those who would walk in any degree a sure path of faith must learn to do the same. The habit of retirement must be acquired. No matter how busy the life, time must always be found, and can be found, for men will always find time for what they really want to do. And in that quiet corner each situa-tion must be weighed. We may appear to do the talking and God the listening, as with Jehoshaphat. We may spread the matter before God. We may reason as to why He should act for us. We may search into motives. We may make supplication. But really it is God getting His own mind through to us, the Spirit helping our infirmities, for we know not what to pray for as we ought; until gradually or suddenly assurance is ours, boldness is ours, heaven is open to us, the throne is a throne of grace, and we are seated with Him in the place of plenty and author-ity. The Spirit has prayed through us according to the Father’s will. The cir-cuit is complete: from the Father to our minds by the Spirit; from our minds back to the Father by the Spirit. The hidden power is released.

More Articles from The Intercessor, Vol 23 No 1

END_OF_DOCUMENT_TOKEN_TO_BE_REPLACED

Words to Live by is a weekly devotional email of Scriptures and quotes that highlight and expound upon our Union with Christ. If you'd like to receive devotionals like the one below, please subscribe using this link. Wednesday June 8, 2022 Revolutionary Truth "Now after the Biblical revelation ... END_OF_DOCUMENT_TOKEN_TO_BE_REPLACED