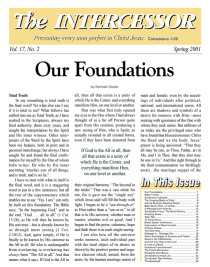 Every true soldier is a hero!
Every true Christian is a soldier!
Join the ranks!
Enlist!

So reads this small but formidable pamphlet by C.T. Studd from beginning to end. It is titled The Chocolate Soldier, but has a subtitle: HeriosmThe Lost Chord of Christianity. As Studd fires on, the reader quickly begins to see the contrast in a Chocolate Soldier (who dissolves in water and melts at the smell of fire) and a Hero (whose very breath is battle) and may then make a determination in which camp he lies. We must divorce Chocolate and Disobedience and marry Faith and Heroism, says Studd, his every word a battle call to be true soldiers for Christ.

Studd hails the heroes of the Scriptures, saluting their desperate ventures for Christ. Noah, Abraham, Moses, David, John the Baptist, Paul. Not an ounce of chocolate in any of them. The secret of these real men? They had but one Director, the infallible One, who requires instant obedience but not the endorsement of any man. You will be truly fortified as you read of these heroes who knew God only, trusted God only, and obeyed God only. You will be sobered and encouraged as you read how some of these heroes joined the ranks of Chocolate Soldiers and the secret of how they got out again.

One by one, Studd picks off the Chocolate Soldiers in the Bible. Rueben, Meroz, Balaam, Demas and the ten spies. Ruthlessly, he rebukes all Chocolate Soldiers for fearing man and not God. Chocolate Soldiers, he says, refuse to judge, rebuke or put away evil. The Christians battle is against the evil one and Chocolate Soldiers merely go to see battles and coolly urge others to fight them. They know nothing of the ammunition given us by Godthe power of the Holy Spirit being in us good, straight, bold, unconquerable, heroic.

I urge you to read this pamphlet, and its both convicting and inspiring message. Those of us who will fight must fight to set up the throne of Christ all over the world. It is not small things that God despises, but Chocolates. God has no use for Chocolates. Are you one?

END_OF_DOCUMENT_TOKEN_TO_BE_REPLACED

Words to Live by is a weekly devotional email of Scriptures and quotes that highlight and expound upon our Union with Christ. If you'd like to receive devotionals like the one below, please subscribe using this link. February 12, 2020 "The illustration that settled me into seeing my proper place ... END_OF_DOCUMENT_TOKEN_TO_BE_REPLACED