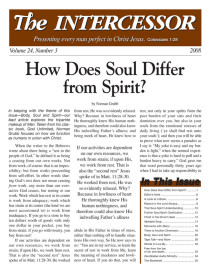 Christ in the Driver’s Seat
by Jon Langley

I work for a well-known British bank as a sales rep, serving small and medium-sized businesses, which is great fun and also challenging. This means I travel around on the road and attend regular meetings with potential new customers, mostly in and around London.

Just the other day I had an early morning meeting scheduled, so I got up early and organized and planned everything so that I was ready. It was about a 3-hour drive to the meeting so I left as soon as possible to allow extra time for any traffic delays. One of the many blessings about my job is that I get to drive a nice vehicle. Perhaps my most favorite thing about the car is that it has a satellite navigation system on it. The reason why I love this piece of technology so much is that my map-reading skills and natural sense of direction leave a lot to be desired. This system works brilliantly for me.

However, not long after I got on the highway as I headed to the meeting that day, I noticed that the navigation system wasn’t working! Furthermore, I did not have a map as a back-up! Getting to the outskirts of London is relatively straightforward, but I honestly didn’t have a clue where I needed to be going once I had reached the outskirts. I felt slightly concerned at the time, but then knew I could get a map from a gas station just before I approached London. "Yep, not a problem. Don’t worry," I thought. So, I bought a map, but quickly found I was struggling to find where I was on the map and where I needed to be for the meeting. Of course without my start and end point I couldn’t plot a route out and suddenly felt stuck, irritated, and a lot more concerned. The meeting would be starting soon

Immediately, some negative thoughts and feelings went through my mind such as"Oh my gosh, I am going to be late; this is going to look bad on me; the customer will think I am not very conscientious; I will be in trouble with my boss." Also, the potential new customer lead had come via a colleague, Phil, who works in another part of the bank. Phil would also be attending the meeting, which seemed to make matters worse. By now, I was feeling pretty uncomfortable and could sense I was becoming more and more uptight about the situation with each passing moment.

Just then, I realized what was happening and thought to myself, "Hold on a second.  I need a time-out here. The truth about this situation is that God knows all about my little predicament. It’s not taken Him by surprise, and it’s not like He wasn’t paying attention that morning." Matthew 10 makes this clear when we are told that not even a sparrow falls to the ground without the will of the Father. We are also told how this is possible in Ephesians 1:23 and again in Col. 3:11, which says, "God is all and in all." So, I stopped for a moment and let this important fact sink in.

Also, as a Christian, I am in constant union with Christ through the Holy Spirit (1 Cor. 6:17), so no matter what I’m doing, there’s never an independent Jon Langley who is going to be late for a meeting–or anything else for that matter. The Bible illustrates this via the vessel/treasure analogy in 2 Cor. 4:7 (that we are made to contain and express Jesus Christ), and also with the vine/branch illustration where Christ tells us, "Apart from Me, you can do nothing."

Being caught up in the moment and the emotions, I had strayed off this truth temporarily, and by getting the right perspective, it was like a huge weight was lifted. I realized and re-affirmed to myself that with Christ living in and out through me. Whatever situation I am in is God’s perfect circumstance for me, and He is able to handle whatever arises. I can do all things through Christ who strengthens me (Phil. 4:13). Christ was literally in the driving seat!

I picked up the map again from the passenger seat and noticed that suddenly, the navigation system was working now! I quickly punched in the address and discovered I was only three miles away from my destination with 15 minutes to spare–VICTORY!

Finding a parking space was surprisingly easy (a major triumph in central London), and I had a few minutes to spare before the meeting. The icing on the cake was that my colleague was the one who ended up being later for the meeting, but I was able to start the meeting on time with the customer and was successful in closing the deal.

This experience reminded me of how we should recognize that even these small daily situations are all part of various trials by which God tests our faith and that we should count it all joy and know that in Him we are complete, perfect and lacking nothing (James 1:2-4).

More Articles from The Intercessor, Vol 24 No 3

END_OF_DOCUMENT_TOKEN_TO_BE_REPLACED

Words to Live by is a weekly devotional email of Scriptures and quotes that highlight and expound upon our Union with Christ. If you'd like to receive devotionals like the one below, please subscribe using this link. Wednesday August 4, 2021 Come to the light "'This is the condemnation, that ... END_OF_DOCUMENT_TOKEN_TO_BE_REPLACED