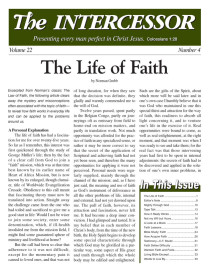 For whoever wants to save his life will lose it, but whoever loses his life for me will save itLuke 9:24

Providefor yourselves a treasure in heaven that will not be exhausted Luke 12:33

So far as he could judge, Studds inheritance was £29,000. But in order to leave a margin for error, he decided to start by giving £25,000. One memorable day, January 12, 1887, he sent off four checks of £5,000 each and five of £1,000. As coolly and deliberately as a business man invests in some giltedged securities, as being both safe and yielding good interest, so C. T. invested in the Bank of Heaven. This was no fools plunge on his part. It was his public testimony before God and man that he believed Gods Word to be the surest thing on earth, and that the hundredfold interest which God has promised in this life, not to speak of the next, is an actual reality for those who believe it and act on it.

He sent £5,000 to Mr. Moody, expressing the hope that he would be able to start some gospel work in North India. Moody hoped to carry this out, but was unable to, and instead used the money to start the famous Moody Bible Institute in Chicago, writing, I will do the next best thing and open a Training School with it.

He sent £5,000 to Mr. George Müeller. He also sent £5,000 to George Holland, in Whitechapel, to be used for the Lord among His poor in London, and £5,000 to commissioner Booth Tucker for the Salvation Army in India. This £5,000 arrived just after they had had a night of prayer.

In a few months he was able to discover the exact amount of his inheritance. He then gave some further thousands, mainly to the China Inland Mission, leaving another £3,400 in his possession. Just before his wedding he presented his bride with this money. She, not to be outdone, said, Charlie, what did the Lord tell the rich young man to do? Sell all. Well then, we will start clear with the Lord at our wedding. They then wrote the following letter to General Booth:

My dear General, I cannot tell you how many times the Lord has blessed me through reading your and Mrs. Booths addresses in The War Cry and your books. And now we want to enclose a check for £1,500. The other £500 has gone to Commissioner Tucker for his wedding present. Besides this I am instructing our Bankers, Messrs. Coutts and Co., to sell out our last earthly investment of £1,400 consols and send what they realize to you. Henceforth our bank is in heaven. You see we are rather afraidnot withstanding the great earthly safety of Messrs. Coutts and Co. and the Bank of Englandthat they may both break on the Judgment Day. And this step has been taken not without most definite reference to Gods Word, and the command of the Lord Jesus, who said, Sell that ye have and give alms. Make for yourselves purses which wax not old.

More Articles from The Intercessor, Vol 22 No 4

END_OF_DOCUMENT_TOKEN_TO_BE_REPLACED

Words to Live by is a weekly devotional email of Scriptures and quotes that highlight and expound upon our Union with Christ. If you'd like to receive devotionals like the one below, please subscribe using this link. Wednesday August 4, 2021 Come to the light "'This is the condemnation, that ... END_OF_DOCUMENT_TOKEN_TO_BE_REPLACED