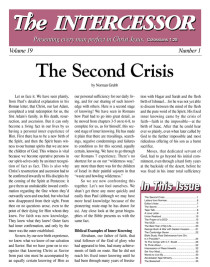 The major part of this issue is dedicated to the pioneering spirit of C.T. Studd, our grandfather in the faith. C.T., Englands foremost cricketer in his youth, was Norman Grubbs father-inlaw, and the founder of the Heart of Africa Mission (H.A.M.). His passion for the unevangelized stood as a stern rebuke to the conventional Christians of his day, and earned him criticism and rejection by those he labeled the Namby-Pamby- Milk-Sop-Softies, those who stayed at home while he and his fellow missionaries labored in the jungle.

Elliot Coatneys review of The Cambridge Seven shows us C.T. in his university days, when he and six other young men of social standing and wealth shocked England by giving up their lives of privilege to head to the mission field with Hudson Taylor. It was there that C.T. met Priscilla Stewart. Dont miss A Love Lettera most unconventional but Biblically sound letter from C.T. to his prospective bride.

Years later, and against his doctors orders, C.T. set off for Africa. There Norman and Pauline, his new wife and C.T.s daughter, joined him. Some years ago Pat Mace recorded Normans reminiscences of these early days with C.T., which she reviews in Tape Talk. In To the Congo with C.T. Studd Norman paints a fascinating picture of missionary life in the 1920s, recounting his own difficulties and failures as a fledgling on the mission field and the stunning answer he foundthe second blessingin the great Galatians 2:20. This same story is repeated from a slightly different perspective in The Second Crisis, in which Norman tack-les the question of inner knowing and how we get it.

Finally, we have C.T. Studds famous battle cry, The D.C.D., which caused such furor back home and ruined Studds reputation in proper Christian circles. It presents as timely a challenge to us today to abandon ourselves to the One who lives in us as it did in 1928.

C.T.s tough stand on sin was partly responsible for his ostracism, as he held that the African converts must abandon their sin in order to be saved and lead sin-free lives. Brett Burrowes echoes this idea in Real Deliverance from SinIs it Possible? American Christianity, in his view, presents a God who understands our imperfections and doesnt really expect us to live without sinning. He finds this view unacceptable and unbiblical, and counters with the solution found in the often-misunderstood Romans 7.

Carol Hoffmanns testimony, The Best Year of My Life, underscores the blessings resulting from the uncompromising stand her family and fellowship took against the chronic and deliberate sin in her own life and the glorious freedom she found in who she really is Christ in Carol form. Union Realized repeats this joyous discovery of the truth in a life previously in bondage to JUST ME.

Finally, as we find ourselves on the verge of a possible war, read Tommy Prewitts excellent and timely George Bush and Saddam HusseinA Matter of Trust. And let us remember, as our President does, that the real battle is fought in the spiritual realm between good and evil. It is to that war that we are called by the pioneers of old, such as C.T. Studd and Norman Grubb.

END_OF_DOCUMENT_TOKEN_TO_BE_REPLACED

Words to Live by is a weekly devotional email of Scriptures and quotes that highlight and expound upon our Union with Christ. If you'd like to receive devotionals like the one below, please subscribe using this link. Wednesday April 7, 2021 What is an intercessor? "Every member of Christ's body ... END_OF_DOCUMENT_TOKEN_TO_BE_REPLACED