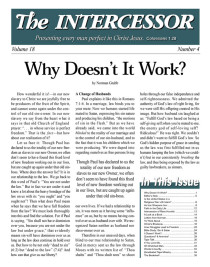 Is the United States in a Religious War with Islam?
by Tommy Prewitt

This is the first in a series of op/ed pieces commenting on questions related to Christianity, United States policy in the Middle East, terrorism, and the Islamic world.

This is an unusual period in American history. We find ourselves in a Middle Eastern geopolitical quagmire considering difficult solutions for impossible problems. Since 9/11, I have felt that by keeping up with the news I was participating in a global hashing out of the issues of the day, and could at least form an opinion of what was right and wrong. However, I have found that despite enjoying the barrage of opinions I get from the cable news shows, I do not own for myself the personal knowledge to think and speak in an enlightened way about these issues.

As has been said by our President, we are at war, and the war is being fought on many fronts: United States vs. Al Qaeda, Bush vs. Bin Laden, Bush vs. Hussein, Israel vs. Palastine, Sharon vs. Arafat. Of course, the real war is Christ vs. Satan, and I felt that with a better grasp of these smaller battles I could more completely understand the much larger war.

I have researched a variety of sources as applied to the state of affairs between the United States and the Islamic world. These sources include the Bible, the Quran, The Economist, The Wall Street Journal, Foreign Affairs, National Review, The Declaration of Independence, The Bill of Rights, and books by Bill Bennett, Robert Spencer, and others. My goal for this piece is to establish a very basic political, historical, and spiritual foundation upon which we can address more specific questions in upcoming issues of The Intercessor.

The problems of Islamic-based, anti-American terrorism are often framed in a mishmash of religious preconceptions, moral relevance, and misunderstanding of political history. In the first case, there is a mistaken notion that all world religions are essentially benign and similar to what is misunderstood as Christianity. For the most part, if you behave in a socially acceptable manner and consider yourself a good person, then God will be satisfied, and you will do well and go to Heaven.  So, since Muslims read the Quran and pray several times a day, they are not too terribly different from us and therefore must be O.K.

Certain liberal academics and pundits demonstrate a dangerous inclination to blame our policies and culture for what the rest of the world thinks about the United States. These serious thinkers rationalize that we are responsible for the attacks of 9/11 because Ossama bin Laden, in response to repressive U.S. policies, was pushed to retaliate with murder. President Bushs current, and I believe necessarily aggressive, position against Saddam Hussein only perpetuates these recriminations. Somehow, since the U.S. is the sole super power in the world, President Bush is the bad guy. Of course, we have dealt with this distorted morality before. We fought Hitler because he was convinced that he was right, and the Soviet Communists hated us because they thought we were wrong.

Arab and Muslim hatred of the United States as a deserved consequence of anti-Muslim, anti-Arab policies is not supported by fact. In fact, in recent years, we have taken pro-Arab, pro-Muslim positions in most every major Arab conflict. Such examples include the defense of Kuwait, an Arab state; against Saddam Hussein; the defense of the Croatian Muslims against Milosevic and the Serbs; the defense of Muslim Afghanistan against the invading Soviets; and the continued expressed policy in support of an independent Palestinian state. Certainly some of these policies involved the protection of American interests, but the United States never gets any consideration in the Islamic world for these pro-Muslim positions.

But the Arab perspective of world politics comes from something much deeper, and this is where the real issues exist. There are profound differences between the political systems of the United States and the countries of the Arab world. The political system of a typical Muslim nation is based upon the Quran. (Iraq may be an exception, but more about that at another time.) Legacies such as the Declaration of Independence and the Constitution do not exist in the Arab world. The Jeffersonian principle of separation of church and state is not found in Islamic nations because, in the Islamic world, the opposite is true: politics and Islam are combined. The Sharia, the Quran based Islamic law, is an amalgam of religion, society, history, regional culture, and politics that is the basis of Islamic life. The combination of Sharia and an Islamic majority result in an autocracy in these countries incompatible with democratic principles.

We therefore must look to the Quran itself to find the roots of Islamic policy, since they are directly and irrefutably connected. This leads to two problems. First, the foundation of the religion is based upon the Five Pillars of Islam: confession of faith, daily prayer, almsgiving, fasting during the religious holiday Ramadan, and if possible, a pilgrimage to Mecca. These essential factors define a person as a Muslim. The external evidence of simply abiding by these criteria labels a Muslim, and for one to declare that another is not a true Muslim is to commit blasphemy. Contrast this to evangelical Christianity. We know that a Christian is defined by repentance from sin and acceptance of Gods saving grace by the death of Jesus Christ on the Cross (John 3:16, 1 John 1:9). We also know to question when someone declares Christianity but does not have the life to support his claim. As Matthew wrote in Chapter 7, verses 15-20, By their fruits you shall know them. These are entirely different criteria, one an inner spirit witness and the other an external adherence to simple criteria. This helps us understand that we are in fact in a spiritual war with Islam.

Consider the responses to the 9/11 attacks. To my knowledge, not a single Islamic voice has ever declared that Osama bin Laden and his suicidal henchmen were not Muslims. The same can be said for Saddam Hussein. Since a Muslim who ascribes to the Five Pillars cannot be driven out of Islam unless he leaves voluntarily, his actions are then by default condoned, based upon the tenets of the religion. Simply put, the fact that he is a Muslim allows him to act and kill as he does, with no repercussions from his own people.

In fact, as we have witnessed, the opposite is true. Although Muslims espouse the peaceful nature of their religion, one needs only to refer directly to the Quran to find evidence that belies this position. In the Quran, Sura 9:5 states, When the sacred months are over slay the idolaters wherever you find them. The idolaters refer to Christians, since believing in the Trinity means that Christians are guilty of shirk, or worshipping created beings.

Contrast this again to Christianity. The Christian world clearly did not support the actions of Jim Jones, of Jonestown fame, who led over 900 of his followers to their death in November 1978. Same of Milosevic, ditto David Koresh. These are not folks who the evangelical Christian world would condone under any circumstances. Similarly, Jesus teachings from the Sermon on the Mount instructing us to turn the other cheek (Matthew 5:38-45) have no corollary in the Quran.

Although admittedly over-simplified, this above background has broadened my understanding of U.S.-Islamic relations. This has enabled me to consider the specifics, such as a war with Iraq, from a different perspective than anything I read or see on the television. George Bush, a godly Christian, versus Saddam Hussein. We will look at that topic in the next issue.

END_OF_DOCUMENT_TOKEN_TO_BE_REPLACED

Words to Live by is a weekly devotional email of Scriptures and quotes that highlight and expound upon our Union with Christ. If you'd like to receive devotionals like the one below, please subscribe using this link. Wednesday April 7, 2021 What is an intercessor? "Every member of Christ's body ... END_OF_DOCUMENT_TOKEN_TO_BE_REPLACED