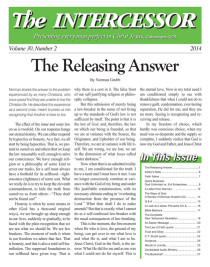 In response to a letter from a fellow believer, Norman Grubb sheds light on the full message of the New Testament and the crucial part of the “total deliverance message” so often missed by Christians.

I recently received a letter from a fellow seeker who wrote me a nice-spirited letter, but then he plunges to the root of what we are teaching, and in this comes out plain counter to us, and so I think it important and valuable to take up what he says, whether or not I take it personally further with him. He says: “Like you we see through our differences to the fact that the circumstances have clarified our commission and our message. Contrary to your thinking, we know the cutting edge as clearly as you. The cutting edge is not a catch-phrase like ‘No independent self’ or ‘Satan-I, Christ-I.’ It is a clear understanding of the paradox–‘we have this treasure in earthen vessels.’ The liberation comes by knowing our union with the Spirit of Christ in every day living, not by unscrambling some theology as to whether or not we were in union with Satan before conversion.”

Can anyone really say that the gospel and all the passion in it is not based on one VAST UNSBRAMBLING??!! A Savior, why? Because a Savior from Satan and “the law of remission of sins,” and “the law of the Spirit of life in Christ Jesus hath made us free from the “law of sin and death”! Only when we knew by the law that “all the world is become guilty before God” do we see the glory of the redeeming blood: and only when striving redeemed Paul found his final hidden enemy was “sin dwelling in me” did he find the glory of “Christ dwelling in us.” Of course we know that, but can we imagine anyone, claiming to give the total deliverance message, can do so without that first glaring edge of our slavery to indwelling sin? We only glory in “Christ liveth in me” because in our great Gal. 2:20 Paul had first said “I am crucified with Christ.” Why crucified? Except to remove that false indweller to be replaced by the True! Have I even needing to say this to teachers of the Liberated life? And of course we know the nitty-gritty of the power and necessity of starting the Gal. 2:20 way of liberation by a crucifixion before a resurrection is because there must be a riddance of the False one before the entrance of the True one.

But the real weakness of what this fellow seeker claims as their cutting edge is there is no point in so stressing Christ in us unless we first make very plain who this “us” is that needs His indwelling–and that is not just a blank empty self, (for there never had been just an empty self), but since the Fall a falsely occupied self by a lying deity! That and that alone gives the cutting edge and the glory of Paul’s great exclamation, “nevertheless I live, yet not I, but Christ liveth in me.” And Paul gives us that desperate discovery of who that “I” is which Christ now indwells when his great dramatic discovery of his Rom. 7 was that it had been “sin dwelling in me” and sin is the expression of the self-for-self nature of the Satan indweller.

And by passing the whole weight of his Rom. 6-8 revelation at the center, put into that one Gal. 2:20 phrase, he quotes in place of that, Paul’s description of our daily battles as the believer in which in our “earthiness” (which means simple humanity), we do not combat the assaults of perplexity, persecution, adversities, but by the very fact of the indwelling Christ–a statement which has nothing to do with the foundations of the “victorious life,” but only with its consequent application!

No, no, a cutting edge means something needing to be cut, and thank God that has now been glaringly exposed to us in that sin-Satan indwelling us and operating us; and that, just that, is what puts passion and glory in CHRIST IN US AS US, as replacement for that false one masquerading as us. Yes, we HAVE a, no, we have THE, CUTTING EDGE OF THE New Testament revelation. He mentions paradox. Yes, but paradox is just having something wrong put right–light swallows dark, life death, Christ-Satan.

Yes, ours is a radical Pauline, Scriptural insight and revelation, and is bound to meet, as Jesus said it would, with fierce opposition from the deceived believers of whom we were part, who seek to protect the inconsistencies of an apparent just human self–which in actual fact is non-existent. And we need to keep reminding ourselves and sharpening our inner understandings of this knife-edged completeness of revelation and our plain Bible basis to it mainly through the epistles of Paul, James and John.

FORMERLY SATAN-I, NOW THROUGH CALVARY CHRIST-I, AND NEVER WAS THE DELUSION OF JUST I-I!

More Articles from The Intercessor, Vol 30 No 2

END_OF_DOCUMENT_TOKEN_TO_BE_REPLACED

Words to Live by is a weekly devotional email of Scriptures and quotes that highlight and expound upon our Union with Christ. If you'd like to receive devotionals like the one below, please subscribe using this link. Wednesday January 18, 2023 Spontaneous Living "We can listen to the law, know ... END_OF_DOCUMENT_TOKEN_TO_BE_REPLACED