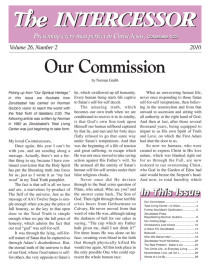 Our Cutting Edge
by Norman Grubb

Examples: Four Movements of the Spirit

I have had contact in my many years with four strong Spirit movements. In each case they have been founded on a strong negative emphasis on sin before coming to the full glorious liberation of replacement by Christ.

In my early college days there was the Oxford Group Movement founded by Frank Buchman, which swept through Britain and America. Its primary emphasis was "The Four Absolutes"–Absolute Honesty, Purity, Unselfishness and Love–and the practical challenge to line up your life of professed Christianity with them. With that came the honest response of making a list of miles of failures. Only then were we pointed to the cleansing, atoning blood of Jesus, and thus boldness in acceptance of cleansing. Then we were presented with the fact of Christ indwelling us and our living by daily "listening" to Him and noting what He said. The radical effects on many lives were due to the first emphasis being on sin-acknowledgment and confessing (often quite lurid) before cleansing and daily guidance were within reach. Though the movement, with its famous book For Sinners Only, was blasted by many believers as being too sin-minded, its aim was right, of course. Even the flow of the pure gospel by Paul began with the iniquities of our fallen condition in Romans 1-3 before presenting the blood atonement. Unfortunately, in later years the Oxford Group Movement dropped its emphasis on the Blood cleansing, and so has almost disappeared in world effectiveness.

The second Spirit movement was C.T. Studd’s emphasis on sin-exposure among his Africans. Law was in operation before grace was applied, and this met with much criticism, as though "Sin and Law" directed. But now, as the years have passed, how well we see the strong foundation laid which has produced all the thousands of Congo (Zaire) believers and churches. The crusade Studd founded has expanded into about thirty-five unevangelized fields around the world with twelve hundred fellow workers.

Then I had close contact with the Ruanda Movement of East Africa, with its best known presentation in Roy Hession’s Calvary Road. It was based on "walking in the light," sin quickly recognized when "the cups don’t run over," sin confessed and cleansed in the Blood, and challenging of each other. This has been used of God in the Spirit-quickening of tens of thousands and is still in action in East Africa and worldwide. Here again the critics seek to point at it as too sin-conscious and sin-confessing and challenging. Yet, it is precisely this that has made it so preeminently Jesus-conscious.

Now, after C.T. Studd in his worldwide missionary crusade, the Oxford Group in its true days, and Ruanda, as modern movements of the Spirit with which I have been connected, some of us are part of a further movement of the Spirit. We are finding that, though still mere beginners in our churchwide, worldwide Spirit commission, our message has its cutting edge, with which I title this article, and is producing both fervent adherents and critical questioners.

The first raw fact is that we were all first Satan-Sin expressers, and of necessity must be brought to realize both our hopeless Romans 3:23 condition as well as our Romans 7 travail along with Paul of "O wretched man that I am!" Only then do we move on to live naturally, with no further condemnation and with the boldness of being spontaneous walking Christs, having once been walking Satans.

Yet along with this glorious new liberation in Romans 8:2, we are at once warned by Paul that we are to "walk" step by step in the Spirit. We are always liable to assaults of the negative and thus lapses into the negative believing (unbelief) through the Satan pressures on us. But always we replace the negative by this positiveness of being He-as-me, and this now becomes our daily and easy adventure of faith. Thus we delight in our normal positive walk, yet always are alive, as Paul said in Romans 8, to diversions and to having them pointed out. So we come back to where I started–to our cutting edge. Such a majority of fellow believers and even victorious life teachers have missed the vital point that the strength of a positive is always in recognizing and replacing its negative. Christ in us–our Positive, as in I Corinthians 11:3 and Romans 11:36–only has force because He replaces Satan-Sin in us.

The Intercessor magazine, weekend fellowships and conferences, literature, and a rising group of representatives and teacher-sharers bring this "total"–with its negative as basis to its positive–to our fellow believers. If it is my final word before the Lord takes me, it is just this: We are peculiarly called as our commission to preserve, emphasize and explain this, thus following directly in Paul’s own steps. Once again we say that the negative must be painfully exposed before it can be healthily replaced, though with vast relief and thankfulness and passion, by its Positive. And that is Christ, only Christ, in and as us, because He takes the place of that false deity in and as us–and makes us FREE INDEED! May our lips never be closed.

More Articles from The Intercessor, Vol 26 No 2

END_OF_DOCUMENT_TOKEN_TO_BE_REPLACED

Words to Live by is a weekly devotional email of Scriptures and quotes that highlight and expound upon our Union with Christ. If you'd like to receive devotionals like the one below, please subscribe using this link. February 12, 2020 "The illustration that settled me into seeing my proper place ... END_OF_DOCUMENT_TOKEN_TO_BE_REPLACED