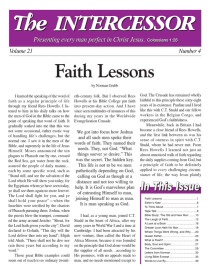 Bible Study: The Old and New Man
by Brett Burrowes

A common belief of many Christians is that we have two natures, an old nature which fights or is in conflict with the new nature. The continuing existence of an old nature would explain why most if not all Christians struggle with sin. Weve probably all heard the old analogy that our two natures are like two hungry dogs: If we feed the old nasty vicious dog, then that nature will become more powerful, but if we feed the new dog or nature and try to be loving, then that dog or nature will dominate. The idea here is that there is a split in the self, one part desiring the good, and the other part delighting in sin and self seeking. Nevertheless, this is not Pauls point of view.

Paul refers to the old and new man three times: Romans 6:6, Ephesians 4:22- 24, and Colossians 3:9-10. In Romans, Paul is saying that when Jesus died on the cross, our old humanity was crucified with him. Now when someone is crucified, he doesnt hang around for very long, a couple of days at most. Crucifixion provided a definite end to ones life: so whatever the old man is, it has met a definitive end in the cross. This is not merely positional truth, as some Bible teachers claim: it is actually true and is the basis of why Paul can say that we have died to sin. In Colossians 3:9, Paul writes that we have put off the old man with its practices, an event in our past. It is something we have already done, so we should not have to worry about the old man, whatever it is.

But then in Ephesians 4:22, Paul says that we still need to put off the old man according to our previous way of life, corrupted and deluded by deceitful desire (Eph. 4:22). How do we explain this apparent contradiction? Have we put off the old man or not? But we need to pay closer attention to Pauls words: according to our previous way of life. What we need to do is to stop living as if we were still the old person we used to be. Stop living according to your old way of life! The Greek word anthropos, does not refer to an internal spiritual nature, but to a person, a human being. It is the kind of person we used to be. In order to make it mean old nature, we must read into it a conception of human nature made defective by the fall that ultimately derives from St.Augustine, as I explained in my previous article. The glaring difficulty with Augustines view of the old man is this: if we continue to have an old nature that is sinful, then how was the old nature crucified on the cross (Rom. 6:6)? So the phrases old man and new man do not mean that we have two human natures: the terms refer not to natures inside us, but to the kind of people we were before and after our initial expression of faith in Christ.

Paul has a different understanding of human nature. We dont possess our own independent self-operating human nature, whether old or new, or good or bad. We need to redefine human nature to refer to our bodies, souls and spirits as vessels indwelt by one of two spirits, Christ or Satan (see Eph. 2:2; Rom. 7:7, 20, 8:9-11, 2 Cor. 4:7; Gal. 2:20; 2 Tim. 2:20-21). In Augustines view, human nature is self-operating but defective, injured by the fall, and that is why it sins. In Pauls and Johns view, our humanity is not self-operating, and we sin because the spirit of sin is operating in our members (Eph. 2:2, Rom. 7:17-20), and we are really doing the desires of our father the devil (John 8:44). So the old man refers to the kind of person we were when we had the spirit of Satan indwelling us. The new man is ourselves, as indwelt by the Spirit of Christ. What we believe about old and new man comes down to our conception of human nature: do we have an independent self-operating human nature that is defective and sinful or is our humanity indwelt by one of two spirits, and therefore not self-operating? I believe the second is the teaching of the New Testament.

In my last article, I wrote about indwelling sin, the flesh and Satan. Sin is the spirit of Satan indwelling the flesh, or human bodily nature. I also explained there that the flesh is not a spiritual nature, but our human body and soul with all their capacities, appetites, desires, emotions, and passions. The problem with the flesh is not that it is inherently defective or flawed, but that it is indwelt by the spirit of sin, namely Satan. Satan indwells our members and misuses us, twisting the desires and appetites of our bodies to express his rebellion against God. The problem is much more serious than a mere flaw or defect: we have been captured and enslaved by a power greater than ourselves

On the other hand, because we have been captured and enslaved by the devil, the solution is simpler. If our humanity is defective, then I just have to live with it, at least in this lifetime. But if Satan has entered in and taken over, then the possibility exists that he can be expelled and that we can be delivered. And this is in fact the case: Now the ruler of this world is cast out (John 12:31).The Greek word for cast out is the language of exorcism: when Jesus casts out demons, the same Greek word is used (see Matt. 12:28, If by the Spirit of God I cast out demons, then the kingdom of God has come to you).

Jesus accomplished this exorcism of Satan on the cross for us: He who knew no sin became sin for us, that we might become the righteousness of God (2 Cor. 5:21). Christ took upon himself the spirit of sin in his own body when he died on the cross, in order that His Spirit of righteousness might dwell inside us in place of Satan. This exchange of Christ in place of Satan becomes real for us personally when we receive Christ by believing in him. In the early church, this confession of faith was always associated with baptism. There was no sinners prayer and no one spoke of praying to accept Christ. Instead, you confessed your faith in Jesus Christ as Lord and in his resurrection from the dead and were baptized. A major part of the early ritual of baptism was the exorcism of Satan from the person receiving Christ. In later times the church softened this to a renunciation or rejection of the devil and his works that the believer made during their confession of faith, though Luther himself included exorcism as part of baptism.

So when we initially receive Christ, Satan is cast out. Paul says that those who have been baptized into the death of Christ have died to sin, that is, to the indwelling spirit of Satan (Rom. 6:3-6). As a result, we are no longer enslaved by the devil, and no longer have to carry out his desires (John 8:34 and 44).

Now one might say: the Gospel of John says that the devil is cast out of the world, but doesnt say he is cast out of people! True enough, but what is the world? Jesus is not saying that Satan is being cast out of rocks or trees, or that he used to float in the air somewhere. Satan is a spirit: he doesnt dwell in material things. No, the world is humanity in rebellion against God: it is humanity that Satan inhabits and rules over! After all, where else would Satan be, except in people? Satan is not in hell, nor is he the king of hell, as popular myth has it: Satan wont be thrown into the lake of fire until the final judgment (Rev. 20:10). So when we first confess our faith in Christ, Satan is cast out of our spirits. Satan does continue to have access to our flesh in order to tempt us, since we have not yet received our resurrection bodies: we who have the first fruits of the Spirit groan inwardly while we wait for adoption, the redemption of our bodies (Rom. 8:23).

But even though Satan continues to attack believers, we should consider ourselves truly dead to his power because the person we once were has been crucified with Christ (Rom. 6: 2-11). We are no longer the person who is indwelt by the devil. The devil may attempt to regain a foothold (Eph. 4:27) and so operate us from the outside, but we should not allow him to deceive us that we really have an old human nature that must be changed or improved. Our humanity is not the problem; it is the spirit operating in us that is the problem. Christ dealt with the persons that we once were by crucifying the old humanity to the cross (Rom. 6:6).When we believed in Christ, we became a new creation (2 Cor. 5:17): we have put on the new man, who is Christ Himself! (Col. 3:10, see Rom. 13:14). But we are a new person not because we have a new human nature of some kind alongside an old nature, but because we are indwelt by a new spirit that is the only thing that has really changed.

END_OF_DOCUMENT_TOKEN_TO_BE_REPLACED

Words to Live by is a weekly devotional email of Scriptures and quotes that highlight and expound upon our Union with Christ. If you'd like to receive devotionals like the one below, please subscribe using this link. Wednesday June 23, 2021 What about condemnation? "We have to learn not to ... END_OF_DOCUMENT_TOKEN_TO_BE_REPLACED