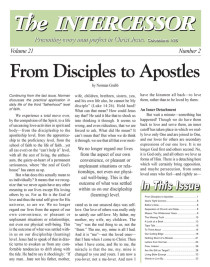 As the Lord God of Israel liveth, before whom I stand, there shall not be dew nor rain these years but according to my wordWhat an introduction we have to Elijah as he spoke to Israels wicked king, Ahab! What is the significance of this bold proclamation? It was a picture of the spiritual life of his fellow Israelites; a drought would show Israel the dried up, barren conditions of their spiritual life.

In both this declaration and his other that follows three years later we see what lies behind the wordshe said it was according to my word. Yet Elijah lived with a wink: it wasnt he, but He. Norman makes clear what faith is: knowledge, certainty, authority, and that Elijahs was the faith of God spoken through the faith of man.

As we look at Elijah and the circumstances that God sent his way, we see his life as an example to us, for us to know for ourselves the principles by which he livedmore than a principle a Person. Norman takes us through the story of Elijahs visit with the woman of Zarephath and her son. She stepped out in faith, trusting God to supply their needs according to Elijahs word to her, and then came to a real faith of her own.

Another person with whom Elijah had dealings was Obadiah. They both became frightened over the slaughtering of the prophets by Ahabs wife, Jezebel. Norman contrasts the difference in their fearElijah knew union, and thus, knew when to come back where he belonged.

There are so many examples of truth that Norman points out in this study of Elijahs life. From the prophets of Baal calling on their god to answer by fire, we see that self-effort wont workSelf cant change self because at bottom there is no independent self: it is really Satans disguised way of living through us. Then with speaking his word of faith of the abundance of rain, Elijah experienced his crisis moment, for he said it and so it must happen. And it didand Elijah completed his intercession, laying down his life for his people.

Norman then gives his insight into Elisha, Elijahs successor. Even though Elisha spent eight years in preparation, serving his mentor and receiving his guidance, when the time came for Elijah to be taken up to heaven by a whirlwind, Elisha knew he didnt have what it took to fill those shoes. This desperation pressed him to say I want a double portion of your spirit. And God granted thisbecause again it is His life poured out to Elisha, His vessel, and then also through Elisha, to others.

Dont miss the richness of the faith lessons that Norman gave us in this three-tape series; he was able to reach into the depths of both Elijahs and Elishas lives and show us the real men of faith that they were.

END_OF_DOCUMENT_TOKEN_TO_BE_REPLACED

Words to Live by is a weekly devotional email of Scriptures and quotes that highlight and expound upon our Union with Christ. If you'd like to receive devotionals like the one below, please subscribe using this link. Wednesday November 18, 2020 The Obedience of Faith "I find that there ... END_OF_DOCUMENT_TOKEN_TO_BE_REPLACED