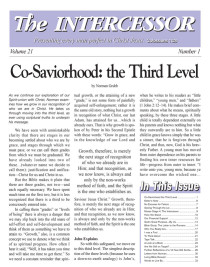 And the Lord said unto MosesLet me alone that my wrath may wax hot against them, and that I may consume them: and I will make of thee a great nation. And Moses besought the Lord his Godand the Lord repented of the evil which he thought to do unto his people.

These people had been involved in all that had taken place since they left Egypt. God had given them the manna and water from the rock. Now they watched Moses going up Mount Sinai to meet the God whose presence and glory were manifest thereand in six weeks they were worshipping the golden calf. How great is the power of the devil over fallen human nature. Aaron, the second-in-command, was the man who fashioned the golden calf. The leadership had not cost him what it cost Moses. His weaknesses and failure did not become apparent until he was left alone. It is always possible to shield yourself under your leader. Moses went up the mountain and left Aaron in charge. Probably Aaron expected him back that night, but he did not come back. Unless the person who is dwelling in the leader is dwelling in you, when you are separated you would be like these people.

In one day, all that Moses had done in two years had come to nothing. When God said that he would destroy the nation, he meant it, and Moses knew it. Never before in a crisis, such as at the Red Sea, had Moses offered himself as a mediator, but now he stood between the wrath of God and the people. He had the offer to take the place of Abraham to be the founder of a new nation, but he refused. All personal ambition had gone long before. He was responsible for these people, and the man who has accepted a commission from God has authority with him. God repented of the evil which he thought to do unto his people. Who made him repent? There is a position of authority with God and when you come there your prevail upon him.

But when Moses came down from the mountain and saw the sin which the people had committed, he went on to Gods side against them. He told the Levites each to kill his brother, his friend, his son, and three thousand died. But even this did not clear the guilt of the sin. God is merciful and long-suffering, but he cannot clear the guilty without an atonement. Moses knew that God could cast them out of his presence for ever, and so he returned to Mount Sinai.

And Moses returned unto the Lord and said, Oh, this people have sinned a great sin, and have made them gods of gold. Yet now, if though wilt forgive, their sin and if not, blot me I pray thee out of thy book which thou hast written.

Moses said, Peradventure I shall make an atonement for your sin. Atonement: there is not a word in the Bible so sweet as that word. When you make an atonement you must pay the very penalty that the one who sinned would have to pay. Again Moses went up the mountain and he was on his face before God for another 40 days and nights. Again he pleaded the covenant that God had made with Abraham. Finally he said, Forgive their sinand if not, blot me out of thy book. We shall have to wait for eternity to know how far Moses meant this.

And the Lord said unto Moses, Whosoever hath sinned against me, him will I blot out of my book. Therefore now go, lead the people unto the place of which I have spoken unto thee; behold, mine Angel shall go before theefor I will not go up in the midst of them; for thou art a stiff-necked people: lest I consume thee in the way.

See how Moses prevailed again. God spoke to him face to face and said, My presence shall go with thee and I will give thee rest. God the Creator met Moses on the Mount and came down to meet the deliverer of the nation. He prevailed on God to go with them and then went further still and asked to be allowed to see his glory. Then God made a covenant that he would drive out the inhabitants of the land before them. So when the nation faced entering the promised land, it was not the giants and the walled cities that turned backthey disbelieved the covenant.

And the children of Israel saw the face of Moses, that the skin of Moses face shone: and Moses put the veil upon his face again, until he went in to speak to him.

The second time Moses came down from the Mount not a single person could look on his face. He had been in the presence of God 40 days and nights. The tabernacle had been put outside the camp and from this time Moses spent all his time in the tabernacle. Without the intercession of Moses, God would not have gone with the people any further, but as the intercessor, Moses brought God again into their midst. He had been a leader before: now he was an intercessor. One man prevailed to bring a spiritual blessing to the people. When the tabernacle was to be built, in the end the people had to be restrained from bringing materials, they brought so much. Their whole attitude had changed. One mans intercession had brought a nation back to God.

Whenever Moses went in to the tabernacle, the cloud came down and God shut him in with himself. It was there that Moses wrote the first five books of the Bible. There, in Gods presence, he wrote as the Lord revealed to him the story of Creation and the history of his people.

More Articles from The Intercessor, Vol 21 No 1

END_OF_DOCUMENT_TOKEN_TO_BE_REPLACED

Words to Live by is a weekly devotional email of Scriptures and quotes that highlight and expound upon our Union with Christ. If you'd like to receive devotionals like the one below, please subscribe using this link. Wednesday November 16, 2022 What about sin and temptation? "What about sin and ... END_OF_DOCUMENT_TOKEN_TO_BE_REPLACED