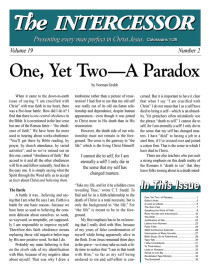 In this issue we again look to those who have gone before, leaving us with a rich spiritual inheritance. The two men whom Norman Grubb credits with having great influence on him were C.T. Studd and Rees Howells, thus we offer more from their lives of faith. Rees Howells and Intercession examines intercession and the principles on which it is based, detailing what that entails for the persons interceding, and also those for whom they intercede. In the excerpt from The Intercession of Rees Howells we see a personal example in Rees life, while in Tape Talk it is the outworking of intercession on a worldwide scale.

The D.C.D., part 2 continues with the Characteristics of a D.C.D. No one can miss Studds fire and passion as he exclaims the importance of the D.C.D. (Dont Care a Damn for anything but Jesus). In The Grim Fact Studd implores every Christian to be about our Saviours business and declares, The shame of being a sham ought to move the most thick-skinned among us.

In our lead article, One,Yet Twoa Paradox, Norman Grubb takes us stepby- step through the truth of Galatians 2:20. This fixed union establishes us in what it means to be a father. As Brett Burrowes writes in Bible Study: On to Fatherhood, spiritual fatherhood is characterized by the willingness to lay down our lives for others who are caught in Satans grasp and to see them through to spiritual maturity.

In Speaking the Word of Faith, Norman stresses the importance of our spoken wordThe word of faith is the act of taking and applying His power according to need. False Faith warns that there are extreme and false interpretations of faith, and Norman cautions us against a Satanic as well as a God-centred, Spirit-guided faith.

In I Was Immobilized, Page Prewitt illustrates by example how one small sin can totally incapacitate us; she gives hope and freedom from the bondage of wrong believing about ourselves. Steven Prewitt shares a very personal application in his book review of Its As Simple As This by Norman Grubb. Dont miss his poignant analysis of Normans book, and the critical way in which God used it in his life.

As stated in the last issue of The Intercessor, we were on the verge of a possible war. These past months have found many of us glued to the news by whichever means we had accesstelevision, internet, radio, newspaper. Now that the war with Saddam Hussein is over, we still want answers to many of the issues raised. Tommy Prewitt in Justification of War looks back to Normans view of war and explains how Norman reached his answers, and how we too can apply those same principles today.

We are thrilled to announce that, in cooperation with Lutterworth Press of Cambridge, England, we have re-published The Intercession of Rees Howells by Doris Ruscoe. We are grateful to Miss Ruscoe for her authorship of it. As it was out of print, we thought it was far too valuable to let slip away. This book is listed in The Bookshelf and can be ordered through Zerubbabel Press.

We endeavor to fulfill that with which we have been charged, and to which we proclaim on the cover of The Intercessor: Presenting every man perfect in Christ Jesus (Col. 1:28). We trust that you will be able to take the truths printed in this newsmagazine and apply them to your life.

More Articles from The Intercessor, Vol 19 No 2

END_OF_DOCUMENT_TOKEN_TO_BE_REPLACED

Words to Live by is a weekly devotional email of Scriptures and quotes that highlight and expound upon our Union with Christ. If you'd like to receive devotionals like the one below, please subscribe using this link. Wednesday January 18, 2023 Spontaneous Living "We can listen to the law, know ... END_OF_DOCUMENT_TOKEN_TO_BE_REPLACED