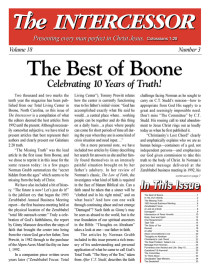 My father first had the vision for the Zerubbabel Conference Center back in the early 1980s. The Total Living Center of today may look physically different than what he envisioned. However, in function, God has accomplished exactly what He said he would have envisioned many years ago: A nucleus of people living in Boone who can do every day of the year exactly what were doing here at our annual business and planning fellowshiplike a committee which coordinates things like pamphlets, conferences, videotaping, etc. Were not looking at a retreat center of this magnitude just to put on retreats and weekend conferences. We dont need a facility for that. But we do need a central place where working people can be together and do this thing on a daily basis. A place where people can come for short periods of time all during the year when they are in some kind of crisis situation and need input from others to help them come to faith in their immediate situation. It could be someone in a marriage crisis, or a financial crisis.

These quotes are taken from a talk my mother, Page Prewitt, gave at the Zerubbabel business meeting in Jackson, Mississippi in January 1989 and subsequently reported in The Intercessor in the July-August issue of this magazine from later that year. It is amazing how accurately this describes the function of the Total Living Center today, 10 years later.

People come here either to receive help or to follow the Holy Spirits drive to participate in the ministry. We live in close community with one another and are involved with the important details of each others spiritual and physical lives. Although many practical needs are addressed, the focus remains: what does it mean for us to live out our lives as Jesus Christ in us on a day-to-day, moment-by-moment basis? How do we recognize and deal with the sin of unbelief that pops up, the sin of independent believing where we begin to think of ourselves as separate from God, instead of as vessels of either Christ or Satan?

Norman Grubb spread the message of the mystery hidden from the ages, Christ in you, the hope of glory most effectively through intimate communication with many, many people. He was, of course, a prolific, eloquent writer and a speaker who traveled the world. But I believe that his impact was the greatest on the individuals who knew him personally, asked him questions, wrote him letters, and involved him in their lives on a personal, spiritually- intimate basis. We continue this emphasis today.

END_OF_DOCUMENT_TOKEN_TO_BE_REPLACED

Words to Live by is a weekly devotional email of Scriptures and quotes that highlight and expound upon our Union with Christ. If you'd like to receive devotionals like the one below, please subscribe using this link. February 12, 2020 "The illustration that settled me into seeing my proper place ... END_OF_DOCUMENT_TOKEN_TO_BE_REPLACED