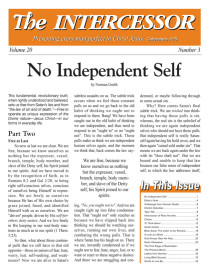 Once again, this year I can’t be with you, and our faithful Lanny will take a message from me. Actually, there’s not a further thing to say, because I have continued conviction that the Holy Spirit has put the liberating truth into focus for us, just as I wrote it as "My Last Word" in my Total Truth pamphlet.

The fact is that self is all we have and are, a marvelous by-product of The Self of the universe. Just as the message of AA’s Twelve Steps is simple enough when you pay the price of full honesty, so the key to that door to the Total Truth is simple enough when we pay the full price of honesty, which admits the fact that our real "god" was self-for-self.

It was through the lying, self-forself nature of Satan that he captured us through Adam’s disobedience. But, the eternal truth of the universe is that of our God, whose fixed nature is self-for-others, the very opposite to Satan’s lie, which swallowed up all humanity. Every human being starts life captive to Satan’s self-for-self deceit.

The amazing truth, which becomes our own truth when we are conditioned to receive it in its totality, is that God’s own Son took upon Himself our human selfhood captured by that lie, and met and for forty days flatly refused to go that same way under Satan’s temptations. And that was the beginning of a life of tension and great suffering, to escape which He did not once take saving action against His Father’s will. So He aroused all the enmity of Satan’s human self-for-self armies under their false religious cloaks.

Never once did He deviate through to the final crisis question of Pilate, who asked, Who are you? and the answer came back, The Son of God. Right through those terrible crisis hours from Gethsemane to Calvary, He never moved from that word of Who He was, although taking the darkness of hell for our sakes in saying, "The cup which my Father hath given me, shall I not drink it?" For three hours He was alone on his face, sweating even blood in the faith that though physically killed, He would rise again. All this took place in the only possible One who could represent the whole human race.

What an unwavering human life, never once responding to those Satan self-for-self temptations, then believing in the resurrection, and from that onward to ascension and sitting with all authority at the right hand of God. And then at last, after those several thousand years, being equipped to impart to us His own Spirit of Truth and Love, on which the First Adam had shut the door to us.

So now we humans, who were created to express Christ in His love nature, which was blanked right out for us through the Fall, are now restored to our overcoming Christ, who, God in the Garden of Eden had said, would bruise the Serpent’s head. And now, in total humility which admits our years of Satan slavery as indeed in the AATwelve-Step program by the one process of faith, we can come to Him seated at the right hand of God. And by His Spirit, Jesus is made into no formal "religion," but into our personal, enduring Christ living in and as us, having replaced that self-for-self lying nature of Satan in us by His self-forothers nature.

Now living in a new nature, we remain, however, still totally surrounded by the products of Satan’s self-for-self nature in covetousness, deceit, envy and wrath, and we continue assaulted along those lines by all that surrounds us. But we now by grace have the clear insight between a Satan self-for-self temptation and the practice of believing in our glorious new self-for-others nature in Jesus. And as we move forward, often in forms in which we have to take up our Cross and die to world enticement, we joy knowers can shout aloud, "O God, my heart is fixed, my heart is fixed" (Psalm 57:7), and we sing and give praise.

Then this passion takes hold of usfor we are all passionate people, created that wayand our sole absorbing drive is to share with all whom we have contact with or can launch out to on a worldwide level this vast difference between being from birth a Satan-expresser in his self-for-self nature and now being a fixed Christ-expresser, who lays down his life for others. That, of course, is the point in my Total Truth pamphlet.

I also thank God I got a shot of fresh Holy Ghost confirmation when I heard how you in Zerubbabel had come out with that word of faith for the millions needed for the Boone Center, and expecting some now. Dates and ways don’t matter. In God’s always surprising methods, what we said in faith means the money is already there and is en route to us in His ways.

With my love to you all, and waiting to see how the Spirit breaks through for this our Total Truth to become the Total Truth of all God’s people.

END_OF_DOCUMENT_TOKEN_TO_BE_REPLACED

Words to Live by is a weekly devotional email of Scriptures and quotes that highlight and expound upon our Union with Christ. If you'd like to receive devotionals like the one below, please subscribe using this link. February 12, 2020 "The illustration that settled me into seeing my proper place ... END_OF_DOCUMENT_TOKEN_TO_BE_REPLACED