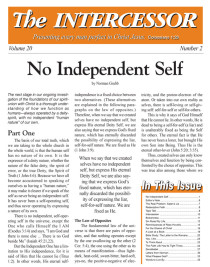 From the time that the Holy Spirit took final and absolute control, Rees Howells was led into a period of much more intensive intercession. A chain of events led him, under the guidance of the Holy Spirit, to make a final break with all home ties and to live apart, alone with God. Outwardly it often seemed a path of failure, but in reality his fellowship with the Lord was deepened and strengthened as he was being prepared for the wider ministry of later years.

To understand some of the lords ways with him at this time it must be remembered that social conventions at the turn of the twentieth century were very different from those of today. For instance, men of all classes wore hats or caps out of doors as a matter of course, and not to do so put a person beyond the pale socially, and to allow hair and beard to grow untrimmed was the mark of a social outcast. All this Rees Howells was required to do, that he might identify himself with the lowest, and die to the opinion of the world, to his friends and especially to his own family. In all this, although it involved many a struggle at first, the Holy Spirit brought him through into wonderful victory, so that he could rejoice in the Lord in the midst of the deepest deprivation and glory in the triumph of the Savior over all the power of the enemy in human life. He entered into a deep personal experience of the love of Christ, a relationship which he always spoke of as the Bride. In later years, when release would come after periods of stress and tension, he could always revert to his relationship and be refreshed and renewed in the love of his Lord.

A special period of testing came after he entered into the position of a steward of his money. He was still working in the local mine, and had come to know a wealthy businessman from London. They had met at the Llandrindod Wells convention, and Mr. Gossett, recognising the deep spirituality of the young miner, invited him to London and accepted his way of life, although at this time Rees Howells was eating only bread and cheese and never wore a hat, something which caused his host acute personal embarrassment in the streets. It was for Mr. Gossetts son that Rees Howells undertook one of his costliest tests, that of becoming a modern Nazirite.

Through Mr. Gossett Rees Howells was introduced to Lord Radstock on whom he made a great impression. Lord Radstock was greatly used of the Lord, especially in Tsarist Russia among the aristocracy. It was becoming obvious that Rees Howells was on the threshold of a great public ministry under the patronage of these men. But the Lords time for this had not yet come and he was called to leave home and enter into deeper abidings and more costly intercessions. Release came eventually and he was called to train for the ministry and then to go to Africa as a missionary.

"Through Mr. Gossett, I was introduced to Lord Radstock, who had revivals all over the country and throughout Russia. He had never heard of Intercession, that you had to die for every gained position before you could apply it. I told him of the Saviour, that until he died he was not to reign. In divine healing I knew I had gained it with the consumptive woman, but she died and the case went to the altar because the first-fruits belong to God. I had to walk it as a failure although the Holy Spirit had witnessed to me that the position had been gained, and I had many cases of healing after that. Lord Radstock had never understood why his young daughter died although he had believed to the end in her healing. Over her dead body he had said, though He slay me yet will I trust him. From that time he had many cases of healing.

"The first real test on stewardship came soon after, at Christmas, when Mr. Gossett sent me two books, and the thought came to me, I will send him a nice New Year card, but the Holy Spirit said, A New Year card is not an essential. I said, It will only cost a penny, but He said, The amount is not the question, but the principle. So I wrote to Mr. Gossett thanking him for the books and explaining why I could not send him a card. He replied, with a gift, saying I would not take all the New Year cards in the world in exchange for your letter. Last Sunday I read it to all the patients in Westminster Hospital, and said, "A position gained by grace."

"Every night for three years I walked the two miles to the Mission and I walked it with the Holy Spirit. I kept my cap in my pocket because I was in the attitude of prayer throughout the walk, and what fellowship we had together. One Sunday morning the glory of God came down on me as I was praying, and then the Lord showed me that my place of abiding for the next intercession to which he had called me, was to be in the attitude of prayer all through the day. This meant that I could not wear a had at all, and would have to walk through the town as well as to the Mission without a hat. There was no more glory that morning! How could I go through the town without a hat? What would people think, above all, what would my mother think? I delayed going out that Sunday evening as much as I could, but at last could delay it no longer. My mother was waiting for me at the door, as usual, with my hat, and I can never forget the effect it had on her when I told her that I was not wearing a hat. My fasting had always cost her, but this meant being a public spectacle. Whatever I was doing throughout the day I was to be in the attitude of prayer. It was a real death to go to work without my hat although in time people got used to it.

More Articles from The Intercessor, Vol 20 No 2

END_OF_DOCUMENT_TOKEN_TO_BE_REPLACED

Words to Live by is a weekly devotional email of Scriptures and quotes that highlight and expound upon our Union with Christ. If you'd like to receive devotionals like the one below, please subscribe using this link. Wednesday June 23, 2021 What about condemnation? "We have to learn not to ... END_OF_DOCUMENT_TOKEN_TO_BE_REPLACED