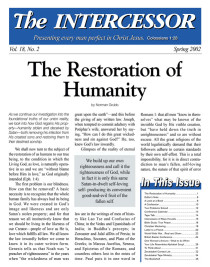 Scott Prewitt, the Zerubbabel youth leader, has taken on what he sees as his God-given responsibility to mentor younger Christians. He realizes that they face multiple temptations as they struggle to maintain a strong faith in who they are in Christ in todays culture. The following series of emails between Fowler Cooper, 19, and his longtime friend, Scott, beautifully demonstrate the commitment and caring that goes along with such a relationship.

Do you want to grab a bite for lunch one day this week?

wow, thats pretty courageous of you to travel up to dc to help out, i think that takes a strong man and i am proud of you, most people would just sit back and marvel at what has happened but you have taken action and that is very admirable, i wish you the best of luck up there and hope you stay safe,

I heard a story yesterday that made me think of you. I thought I would pass along to you as a word of encouragement.

Milton Hershey was the founder of Hersheys Chocolate Factory in the early 1900s. Mr. Hershey was a very principled man and a devout Christian. Everything he did in life had its roots in his belief in Jesus Christ and Gods call to us to live up to His standards. Mr. Hershey was a very wise business man; God blessed him in the ability to make good business decisions, and he built a huge fortune in the chocolate and candy business.

During the depression, while much of our nation had no jobs and no money, Mr. Hershey made it his mission to take care of the entire town that had been built around his factory; the town is Hershey, Pennsylvania. Every man had a job, and a decent paying one at that, all throughout the depression. He was also a great philanthropist, building schools, hospitals, churches, etc. all around his part of the country.

One of Mr. Hersheys most brilliant business moves was to buy his own sugar plantations. That way, he controlled his most basic raw material from start to finish. He controlled quality, quantity, and cost of sugar. He did not have to rely on anyone else for sugar, and this kept his costs constant and low.

One day, sometime in the mid 1950s (I think), Mr. Hershey called together his top staff and told them that he had been moved and compelled by the Holy Spirit to sell all of his sugar plantations. His aides told him that he was crazy, it didnt make any sense, he should not do it for any reason. Mr. Hershey would hear nothing of it. He knew the voice of the Holy Spirit, and he was going to do it no matter what.

So, they did. All of his sugar plantations were sold. He was now susceptible to the open market for his most basic and important raw ingredient-sugar.

In a matter of months after selling the plantations, without warning, Fidel Castro led a revolution against the government of Cuba. Castro and his communists took over the country, kicked out all of the foreign businesses, and claimed all land and all businesses as the property of the communist party of Cuba.

You see, all of Mr. Hersheys sugar plantations were located on the island nation of Cuba. In a matter of months, the Hershey corporation would have lost all of the enormous value of their plantations there. This loss would have devastated the company. However, the Holy Spirit was speaking to Mr. Hershey, and more importantly, Mr. Hershey was listening. Mr. Hershey was obedient to what the Spirit had to say, despite what everyone else around him thought and said about it.

Fowler, the Holy Spirit talks to us and walks through us every day. Keep your ears and your heart open to Him. The Spirit is always looking out for us, and will guide us just like He did Mr. Hershey. Gods will is NOT somewhere out there for us to seek; no, His perfect will (His perfect plan) for our lives is inside of us, talking to us, directing us, living out through us, all of the time … 24/7. Our part = listening, obedience, trust, faith, action, love of others and not of self!

Sonny, listen to the Spirit, follow Him, do what is right, and watch your lifes perfect plan in Christ unfold before your very eyes!

hey, thanks for the story it was very encouraging and very inspiring. i have known all my life that God has a perfect plan for me and i have known that all i needed to due was to listen but i guess i never really wanted to pay attention to what he was telling me when I was younger and rebellious. i dont know how many countless stories and miracles i have heard about Gods will but it never really had an impact on me. i am starting to realize how very true that is, that God does have a plan for me, a perfect plan and all i have to do is listen. honestly, it makes me very excited.

i just called your cell phone, im sure it didnt ring because what sense would it make for a phone to ring, anyway, im eating lunch with the padres (parents) and then i was going to come by and get that stuff, so i will see you this afternoon, talk to you later

im glad you liked the story…i really liked it too…it is VERY exciting when you realize that your God, who is bigger, stronger, smarter, (you fill in the multitude of other examples here) than you, who created you, actually has a plan for you and IT IS PERFECT!!!! it makes sense that the one who created you knows what is best for you, how you work, etc… stop and think for a minute…we are so damn small and insignificant held up against the Creator and Ruler of the universe!!!! Isaiah 45:9 says, Woe to him who quarrels with his Maker, to him who is but a potsherd among the potsherds on the ground. Does the clay say to the potter, What are you making? Does your work say, He has no hands?

think even further…as small as we are, God actually chose to reproduce Himself IN US AND AS US! … WOW WOW WOW … as containers (vessels) of the Holy Spirit, we contain and EXPRESS the God of the Universe!!!! Romans 8:18-19 says, I consider that our present sufferings are not worth comparing with the glory that will be revealed in us. The creation waits in eager expectation for the sons of God to be revealed.

your fear will go away with faith and trust…heres a little secret…it is easy to have faith in God…where the rubber meets the road is this…having faith and trust that Gods plan, His way, His rules, His will IS PERFECT FOR YOU (which means that you shouldnt go away from or against His plan, His way, His rules, His will)…thats what you have to speak back to because thats where Satan will tempt you away from trusting…

ps: my dang cell phone just rang with a message that you left, oh, i dont know, about 45 minutes ago…so frustrating!!!!

i hope your interview with dan goes well…remember, dont be afraid to spell out very clearly what you would like to do…also, dont be afraid to hear what God might have for you (hear what dan has to say to you)…i am very proud of you for your desire and commitment to be a man of God through Young Life and its leadership opportunities…

what up, thanks for the words of encouragement, i actually had to reschedule my interview because i forgot i got my days mixed up and i have class when we were supposed to meet so i think we are meeting later this week or next week, how about lunch sometime this week, let me know what works for you,

talk to ya later fowler

i still havent had any issues with alcohol, many people act very surprised when i say that. i guess after falling into that trap so many times, God has blessed me with the ability to say no, and be proud of it, and i cant thank Him enough for that.

im thankful youve had such a good semester. you have managed i think to live a very well rounded life this semester academically, athletically, socially, and spiritually. you have really taken the college experience and done so much with it. keep it up! next semester will certainly be more challenging, but youve set up a good foundation to build on.

END_OF_DOCUMENT_TOKEN_TO_BE_REPLACED

Words to Live by is a weekly devotional email of Scriptures and quotes that highlight and expound upon our Union with Christ. If you'd like to receive devotionals like the one below, please subscribe using this link. Wednesday June 8, 2022 Revolutionary Truth "Now after the Biblical revelation ... END_OF_DOCUMENT_TOKEN_TO_BE_REPLACED