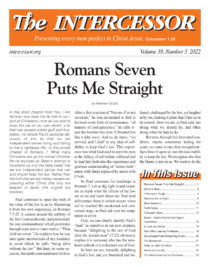 In this short chapter from Yes, I Am Norman lays bare the lie told to us—and all Christians—that we are able to keep the law on our own steam, a lie that has caused untold guilt and frustration. He details Paul’s personal discovery of this lie—that we are independent selves trying and failing to live a righteous life—in the pivotal chapter of Romans 7. What many Christians see as the normal Christian life he exposes as Satan’s attempt to hoodwink us into the false belief that we are independent selves that can and should keep the law. Rather than the truth that we are merely vessels expressing either Christ (the only law keeper) or Satan (the original law breaker).

Paul continues to open the truth of the value of the law to us by illustrating it from his own experience, in Romans 7:7-25. It centers around the subtlety of the Ten Commandments, and particularly the one commandment which penetrates through outer acts to inner motive: “Thou shalt not covet.” He explains how he was once quite unconscious of any tendency to covet–which he calls “being alive without the law.” But later, on some occasion, this tenth commandment hit him. After a first reaction of “Not me–I’m not covetous,” he was devastated to find in his heart every form of covetousness–“all manner of concupiscence,” he calls it–and this bowled him over. It flooded him like a tidal wave. And so, he states, “sin revived, and I died” to any idea of self-ability to keep God’s law. This experience was what God used to open his eyes to the fallacy of self-reliant selfhood and to lead him both into the experience and glorious understanding of “union truth”: union with Satan replaced by union with Christ.

So Paul continues his teachings in Romans 7. Let us dig right in and examine in depth what the effects of the law are on us and learn about our final total deliverance from it–which occurs when we’ve reached the awakened and concerned stage, as Paul did over his temptation to covet.

First, we can clearly identify Paul’s “man” as ourselves in our new creation, because “delighting in the law of God after the inward man” (7:22) obviously implies it is someone who has the new-heart outlook of a redeemed son of God.

So here we are, inwardly delighting in God’s law, and yet frustrated and defeated; challenged by the law, yet laughed at by sin, making it plain that it has us in its control. Here we are, as Paul said, not doing what we should do, and often doing what we hate to do.

But now, through this frustrated condition, maybe sometimes lasting for years, we come to one clear recognition–facts force it upon us: our obvious inability to keep the law. We recognize also that the blame is not on us. We want to do the right thing but haven’t the power: “To will is present with me, but how to perform that which is good I find not” (7:18)–so at last we can trace the trouble down to the culprit. What a vital revelation! It is not I, it is sin that dwells in me, masquerading as self-effort.

At last, light has begun to break in on us. Twice over (see verses 17 and 20) Paul exclaims, “That’s it, that’s it; it is not I, it is sin dwelling in me.” It is not the redeemed Paul who is the culprit. It is indwelling sin. He sees it plainly to be not himself but something quite apart from himself. “It is no more I that do it, but sin that dwells in me.” The culprit is self-relying self! The “sinner” is a separate power who claims to have him as his captive. “I am carnal, sold under sin” (7:14). The commandment came, Paul explains, and when he rose up to do it, sin played a deceitful trick on him: “I’ve got you. You can’t do it. I’m your master and you’re my slave, for your very self-reliance is my bondmark in you!”

At that time it would have appeared to Paul, and certainly to multitudes of us, that we are in a condition of permanent warfare. It looks as if we have two natures–my redeemed self that wants to do good, and indwelling sin which defies and defeats me–dog eating dog. And thousands of God’s people think that’s all it can be: a life of struggle, striving, and much failure…with self-condemnation.

But now came the breakthrough of this whole revelation to him—that the human is never anything but the vessel, container, branch, etc., of the indwelling deity. Now he sees it! “The law has nothing to say to me. It is not I who am covetous; those sinful urges come from an altogether different source–not I, but indwelling sin.”

The law has really been my friend…hanging over me and putting its pressure on me until at last I see my delusion about self-effort living. Until I see that self-effort is Satan’s principle the power of indwelling sin has me in its control.

So here is the revelation of total importance–or shall we say, the negative side of the total positive revelation. We can compare it to our prior experience in our unsaved days: I could not settle into the positive recognition of Christ as my substitute and sin-bearer until I first knew, in a total negative way, that I was a lost sinner, with my righteousness as filthy rags…and noting I could do about it. Only then could I say, “Oh, I see! He took my place.”

So now, in this central battle raging around my redeemed self, how can I live my life as a consistent Christian and meet the challenge of the law and its “you oughts”? I cannot see the positive revelation of Christ living His life in me, replacing the false indweller, until I have first seen the total negative revelation of it–that the command has nothing to do with my “human” me except as my being a vessel or container, but has all to do with this false indweller who is still claiming to live in me and express himself through me. I learn that he grabbed me as I was trying to keep the commandments (an expression of self-effort) and “deceived me and slew me.” I can now see why it says “deceived me”—because sin was making a whole, lying claim to indwell and control me, while all the time really Christ was in me…and I didn’t know it. Until I did know it, and experience it, it meant nothing to me and left sin in deceitful control of me. That was how the law with its “you oughts” also kept its control over me and brought me under its condemnation…while I was under this lying illusion of self-responsibility and equally in the delusion that sin dwelt in me instead of it really being Christ living in me.

END_OF_DOCUMENT_TOKEN_TO_BE_REPLACED

Words to Live by is a weekly devotional email of Scriptures and quotes that highlight and expound upon our Union with Christ. If you'd like to receive devotionals like the one below, please subscribe using this link. Wednesday November 16, 2022 What about sin and temptation? "What about sin and ... END_OF_DOCUMENT_TOKEN_TO_BE_REPLACED