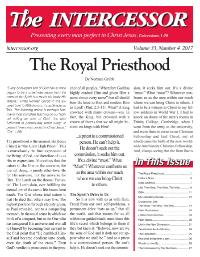 My Liberating Secret
by Kathy Gilsenan

The Liberating Secret is one of my favorite books by Norman Grubb. The biblically-based “total truth” which he systematically outlines in this book has truly changed my life! I want to tell the whole world that what Norman writes in this book is true! There really is no such thing as a self-operated human being. We are either operated by Christ or by Satan. I know this to be true through reading it in the Bible and through experiencing it in my own life. This article is not a book report per se. It is my testimony of how understanding and putting the truths written in this book into practice have impacted and freed me. It has been my liberating secret!

While reading The Liberating Secret, God convicted me and impressed several significant things upon me. One of them being my dishonesty. Throughout this wonderful book, Norman has a common thread that ties together how to “walk in the light as He is in the light”–and that is being rigorously honest about ourselves with God and with our brothers. The gut-wrencher for me, and what really hit me hard was when Norman says, “Dishonesty, not sin damns a soul.” He goes on to add that “unwillingness to part with sin and therefore refusal to admit ourselves to be what God shows us we are by His word, by preaching, by the Spirit is what sends us to hell. For the horror of sin is that we love it, and hate that which would turn us from it.”

The truth I did not want to admit about myself was that I was a chronic liar. Ever since I was a small child, lying became a way of life for me. I would lie or withhold information if I thought that I would be disliked or thought of in a bad light, or that someone would be angry with me. I had no integrity whatsoever. The more sinister sin, which became an addiction all in itself, was that I liked the feeling of thinking I got away with something or that I had fooled people into believing that I was nice, innocent, and wouldn’t hurt a fly. I would do or say anything to get some kind of positive or affirmative reaction. I was manipulative, phony, and hidden. I was also a hypocrite. I didn’t want anyone to know what I was really like inside. I was full of lies, jealousy, resentment, and had an ungrateful, irreverent heart toward God.

I carried on this behavior up until two years ago, when I finally got to the point where I hated how I was and saw how I had affected my family–my children and closest friends. Then I realized that although I wanted desperately to stop sinning against everyone, “I” couldn’t stop. This is because I was believing I was “just Kathy,” and believing that lie gave Satan the ability to boss me from the outside through my soul/body. (Christ was still joined to my spirit, but was blocked because of my sin.) I had no control over what I did or said. I had no hope of ever being different. This was my second crisis that Norman talks about. Finally, the conviction and revelation came that if Christ was not operating me, it really was Satan (John 8:44). I became fearful because I didn’t know what he was going to do by me. I knew that only Christ could live right through me.

I needed to choose to stop the lies, get honest, and confess my sin. That is the only way that Christ could have a clean vessel to live out through. Here again I was convicted by Norman’s words in Chapter 21, “The Way To Abide”: “But the trouble is that, through the subtlest of all hidden sins, the sin of pride and self-righteousness, I don’t want to admit that I, a believer, have slipped into sin. So I call it by another name. It is my nerves; I was born like that; it is my physical condition…but not sin!” Norman says, “All that God has ever required of a human being, whether saved or unsaved, is honesty. It is all we can contribute to our own salvation. We cannot remove our guilt or change a habit. But we can discern good from evil, and we can admit the truth about ourselves as we are brought to see it.” It wasn’t until I was rigorously honest with God, confessed my sin to Him and more importantly, the people I sinned against, that I was set free from Satan’s bondage and control over me. Norman says that “confession before men does not leave a rag of self-righteousness. It is the capitulation of the final and most jealously guarded citadel of self.” I think it is also important to say that I cannot even take credit for repentance or anything other than honestly seeing my sin as God sees it, hating it, and desperately wanting to be free of it. God gets all the glory!

So, I confessed my sin to God and others and trusted Christ to live His life out through me. I never want to be where I was again. Now I am diligent about taking every thought captive and being honest. If I do sin, I confess it immediately for I know that I am not just me. Sin is Satan operating me, and I know how far into darkness he can take me. As born-again Christians, we are called to “walk as He walked,” which means perfectly. Norman says that only Christ living in and through the believer can fulfill this commandment. He goes on to say that nothing can obstruct the flow of the Holy Spirit except sin; that when the “cup is not running over” there is sin in the heart. That is easy to understand. But what is not as obvious are Satan’s constant, subtle attempts to get us to believe his lie that we are independent of God (Satan’s original sin). Once we believe that, he controls us through our members (though never again from our spirit center as when we were unsaved). I found it very helpful when Norman describes how you can know whether it is Christ or Satan talking to us. I won’t spoil the answer by telling you. I urge you to find out what he says for yourself. It is so worth it! (Hint: it’s in Chapter 21.)

So, The Liberating Secret was a resource that God used to help me when I was desperate for Christ to live His life through me, as me. As a result, I am free! I have true joy like I’ve never experienced before. If you have never read The Liberating Secret, do yourself a favor and read it. If you have read it before, pick it up again and see how the Lord speaks to you anew! You may find it to be your liberating secret too.

More Articles from The Intercessor, Vol 33 No 4

END_OF_DOCUMENT_TOKEN_TO_BE_REPLACED

Words to Live by is a weekly devotional email of Scriptures and quotes that highlight and expound upon our Union with Christ. If you'd like to receive devotionals like the one below, please subscribe using this link. Wednesday April 7, 2021 What is an intercessor? "Every member of Christ's body ... END_OF_DOCUMENT_TOKEN_TO_BE_REPLACED