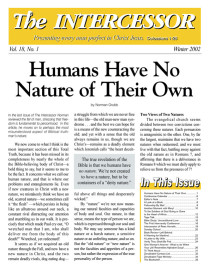 Norman begins by describing 2 Corinthians as one of Pauls intimate lettersa love letter in which Paul runs from one point to another without any sense of it being prepared more speaking from the heart. Those same words could equally apply to Normans talk. He advises us to follow the scriptures as we listen to him, since hes just dodging around, picking out here and there. As always with Norman, his dodging around in the scriptures unearths many gems. Those of you who are familiar with Norman will know that his gems are not some pretty little trinkets to be taken out and admired on occasionsmore like pearls that bring great delight, may irritate at times, will certainly challenge and can produce untold wealth.

Through the two tapes Norman captures the intimacy of the relationship between Paul and the Corinthians. Paul was passionate about these people and was glad to spend and be spent for them. Yet, he is also prepared to deal harshly with them when necessary. Where sin had been left unchallenged, Pauls concern was to turn people back from the casualness of allowing loosened standards in the church. Thus, the letter demonstrates discipline through lovethe only true love.

2 Corinthians is a letter written to a church in crisis. The church was under fire as personal assaults were made on Paul, accusing him of being an unreliable apostle. In the letter Paul addresses these attacks on him, which could seriously damage their faith. However, as Norman points out, the attacks only bothered Paul in so far as they affected the Corinthians. His hurt was only because they were hurtthe mark of a true intercessor. Norman reminds us that as intercessors our interests cease to be around ourselves because our needs have been met now we can be what were meant to bea person for others.

Norman explores instance after instance of how Paul saw everything as an opportunity to benefit others. This letter begins by Paul reaffirming the total sufficiency of God in the midst of his many sufferingssufferings that were greater than most of us can imagine. Yet as the God of all comfort comforted Paul, we learn that his comfort was really for the benefit of the Corinthians. Norman emphasises that the only way we can transmit anything to others is in so far as we have it ourselves.

One of the many challenges of these tapes is a sort of underlying assumption on Normans part that Pauls life as an intercessor parallels ours. There is no room for thinking of Paul as some higher being involved in lofty exploits beyond the reach of us mere mortals. The same Lord lives in all of us. Once we settle into the fact that were only vessels and Hes the deity living in us life becomes free and often fun. Yet Norman doesnt beat about the bush. We are reminded that the life of an intercessor will cost physically, mentally and psychologically. But we are also reminded that the inner man is renewed. In Normans words, Theres a bounce in a Christiana quality of glory, peace and victory in the midst of trials. The life of an intercessor involves a hidden dyingagain and again accepting things we dont like. However, the end result is that the life of God shines through and as death works in me, life works in you (2 Cor. 4:12).

These tapes are not for you if you are looking merely for some gentle exposition of the scriptures that leaves you refreshed and comfortedand sitting at ease in your armchair. But if you want to accept the challenge as well as reap the benefits of spiritual insights that touch the very core of life, then I recommend them thoroughly. Norman describes Pauls letter as a marvellous presentation of how a servant of Godor anybodyany one of you must live, if were keen edges for Christ. These tapes help bring home that message.

Irene is a teacher in County Kildare, Ireland. She and her husband, Richard, are Zerubbabel Contacts for Europe and are actively involved with the UK fellowship.

More Articles from The Intercessor, Vol 18 No 1

END_OF_DOCUMENT_TOKEN_TO_BE_REPLACED

Words to Live by is a weekly devotional email of Scriptures and quotes that highlight and expound upon our Union with Christ. If you'd like to receive devotionals like the one below, please subscribe using this link. Wednesday September 16, 2020 What about condemnation? "We live in the ... END_OF_DOCUMENT_TOKEN_TO_BE_REPLACED