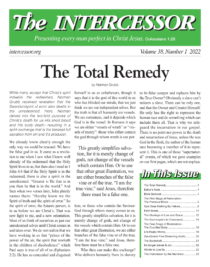 While many accept that Christ’s spirit indwells the redeemed, Norman Grubb received revelation that the Satan/sin/spirit of error also dwells in the unredeemed. Here, Norman delves into the two-fold purpose of Christ’s death for us–His shed blood and His body death—resulting in a spirit exchange that is the blessed full salvation from sin and it’s producer.

We already know clearly enough the only way we could be rescued. We have the false god in us. It came as a revelation to me when I saw what I knew well already of the redeemed–that the Holy Spirit lives in us; but then also I read in 1 John 4:4 that if the Holy Spirit is in the redeemed, there is also a spirit in the unredeemed. “Greater is He that is in you than he that is in the world.” And then when two verses later, John plainly names them: “Hereby know we the Spirit of truth and the spirit of error.” So the spirit of error, the Satanic person, is in us before we are Christ’s. That was new light to me, and a new orientation. Most of us think of ourselves as just our unredeemed selves until Christ comes in and takes over. We do not realize that we have working in us that “prince of the power of the air, the spirit that worketh in the children of disobedience” which Paul says is true of all of us (Ephesians 2:2). He has so concealed and disguised himself in us as unbelievers, though it says that it is the god of this world in us who has blinded our minds, that we just think we are our independent selves. But the truth is that all humanity are vessels. We are containers, and it depends which God is in the vessel. In Romans it says we are either “vessels of wrath” or “vessels of mercy”: those who either contain the god through whom wrath is our portion, or those who contain the Saviour-God through whom mercy comes to us. This greatly simplifies salvation, for it is merely change of gods, not change of the vessels which contain Him. Or to use that other great illustration, we are either branches of the false vine or of the true. “I am the true vine,” said Jesus, therefore there must be a false one.

Who then can make this exchange? Who delivers humanity from its slavery to its false usurper and replaces him by the True Owner? Obviously a slave can’t redeem a slave. There can be only one, and that the Owner and Creator Himself. He only has the right to represent the human race and do something which can include them all. That is why we safeguard the incarnation in our gospel. There is no point nor power in the death and resurrection of Jesus, unless He was God in the flesh, the author of the human race becoming a member of it to represent it. This is one of those “supernatural” events, of which we gave examples on our first pages, which are not explicable in terms of human thought but issue from the spirit, not the matter, dimension. So it is no good trying to explain or explain away what issues from the realm of what we call the impossible, but we are to learn what is really the only actual. Human thinking is what has bound us to realms of time and space; for the true realm we must have “the renewing of our minds,” the “new man which is renewed in knowledge after the image of Him that created him.”
The way in which this change of gods has become a fact has of course held our fascinated and almost microscopic attention and investigation through the centuries. And no wonder. “Upon Another’s life, Another’s death I stake my whole eternity.” “God forbid that I should glory save in the cross of our Lord Jesus Christ.” “I was determined not to know anything among you, save Jesus Christ, and Him crucified.” We will put it in simplest terms to relate to what we have already said. Why Christ’s death? We humans have got so physically minded that death to us always means the physical. But we who are believers know better. We know physical death is only the gateway to life after death. Where? Ah, that is the crux! The Bible makes plain that if we die a child of the devil, we continue on into the devil’s destiny which is described in the terms of its supreme loss as “everlasting destruction from the presence of the Lord and the glory of His power.” Therefore death for Jesus did not just mean the physical dying. If as the One who never was made captive by the devil and thus not under death’s dominion, He accepted death on our behalf, then He would go after physical death where we would go, into what Paul called “the lower parts of the earth,” the realm of “the spirits in prison.” And that is where He did go. Maybe that is why there was such reality in the cry, “My God, My God, why hast Thou forsaken Me?” Supposing He didn’t rise? He had to go this way by nothing but faith, as the rest of us.

But He did rise. There was nothing that could hold Him, because, though our sin bearer, He was not Himself a sinner under the law of sin and death. Therefore, “quickened by the Spirit,” He could be “raised from the dead by the glory of the Father.” And what did He leave behind on our behalf? That is what is important to us. He left both the cause and effects of sin. The effects are our destiny in outer darkness, the consequence of the curse of the law, the guilt, the condemnation, the weeping and gnashing of teeth, the worm that dies not and the fire not quenched. All disappeared from sight forever, because He took them on Himself on our behalf, and then left them behind on our behalf when He arose. Therefore Paul said that in His resurrection we are justified; in other words, not merely forgiven, which might still leave a memory behind of the things for which we needed the forgiveness; but justified, meaning that we are as spotless, sinless, as the Saviour Himself; and all the past in memories of fact or dread of destiny are out of sight and out of mind forever. That is the overcoming in the blood of the Lamb. Nothing can be held against us. “Who shall lay anything to the charge of God’s elect?” “It is God that justifieth.” The shedding of the blood was the physical evidence of a life totally poured out to death, and therefore taking all with it that would come to us if we died.

But that alone, tremendous as it is, would not solve our problem or give humanity its release. The cause is our problem, the sin, not the sins. And we have seen sin to be the term used for the nature of the spirit of error who lived his sin-quality of life in his vessels and by the law of an indwelling spirit, he expresses himself through the human spirit which he indwells. Sins are the products, but the producer is the problem. And what salvation would it be for a human race indwelt by the spirit of sin and thus compulsively expressing his self-loving nature, to be released from the consequences of a sinful life, but not from the compulsive cause? We should just go on living as before. Therefore the Bible presents us with Christ’s death in a twofold form–in His blood and in His body, of which we are continually reminded in the memorial Supper. And that is why in Paul’s 1 Corinthians 10:16-17 reference to the Supper he speaks of our communion in the blood and body of Christ. But then he says we are one with Him and His body, symbolized by the bread; but he does not say in the same sense that we are one with him in His blood. The reason is that a person’s blood is his very self. When that is shed, his life is gone. But a person’s body is more external, more we may say his clothing. His blood, therefore was uniquely Him going that way of death for us, and in that respect we were not dying on that cross with Him. Rather we come to the foot of that cross and see the burdens of our sins rolled away into His tomb, as Bunyan so beautifully puts it. But we are His body. “We being many are one bread, one body”; and in that aspect of Him on the cross, we are there with Him, crucified with Him, buried with Him, risen with Him. And what’s the import of that? Because the body is the container of the spirit, and we humans have become containers of that false spirit of error, whose nature is sin, therefore Paul says that Jesus did more on Calvary than “bear our sins in His own body on the tree”; he said, “God made Him to be sin for us.” And that meant that in God’s sight we were He, crucified with Him, and His body representing us had that spirit of sin in it. And then the glorious fact that when a body dies, it is separated from the spirit in it; and so when He died, Paul said He “died to sin” (quite different from dying for our sins). His body, representing us who were “buried with Him,” lay in the tomb with no spirit in it–a human race delivered from that old false indwelling spirit of error. And when He rose, it was by the entry of another Spirit, His Holy Spirit. So when we are joined by faith to Him in His death and resurrection, we are no longer vessels containing the spirit of error, but vessels containing the Spirit of God! That is a full salvation–from effects and cause, from products and producer. That is why only the incarnate, crucified and risen Christ can be the world’s Saviour.

–excerpted from
Norman Grubb’s book Who Am I?

More Articles from The Intercessor, Vol 38 No 1

END_OF_DOCUMENT_TOKEN_TO_BE_REPLACED

Words to Live by is a weekly devotional email of Scriptures and quotes that highlight and expound upon our Union with Christ. If you'd like to receive devotionals like the one below, please subscribe using this link. Wednesday January 18, 2023 Spontaneous Living "We can listen to the law, know ... END_OF_DOCUMENT_TOKEN_TO_BE_REPLACED