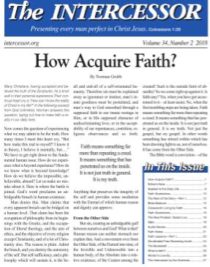 The branch, the vessel, the temple, the wife—all are dependent. The branch is dependent upon the vine, the vessel upon the contents, the temple upon the deity, and the wife upon the husband. The analogy of the owner and the slave shows that the master is the one who owns the slave, and as in Romans 6:17, the slave is never his own owner or his own operator.

So, if you are a believer, to even “see” yourself as an “alone-I” who has the ability to operate himself–even that seeing is sin. The Scripture says when we find sin present with us to confess it. So the remedy is just to confess it. Call it sin and confess it. By confession I don’t mean “sackcloth and ashes.” Confession is no more than agreeing with God. It’s as if God says, “Look what you have been doing. You have let the enemy get you confused and mixed up. See it. Confess it.” It’s as simple as that.

The worst sin you will ever find out you have committed is the sin of wrong believing about yourself. And in doing that, you have allowed Satan to misuse you. That is what is wrong with every non-redeemed person, and with every born-again person who commits sins, minor or major–small ones that just “mess up” your life or blatant Biblical sins. Serious sins like theft, murder and adultery always stem from wrong seeing about ourselves as believers.

Wrong believing about yourself can cause conflict in a marriage, in the work place, with your children and in other situations. Satan, in your “independent self” believing, manages to get his hooks into your “members.” The Bible talks of believers in these terms: “sin in my members” (Rom 7:23). “Members” means your soul and body (your “flesh”) and not your spirit. Satan gets his hook in there and he is the confusion. He is the cause of the confusion. I’m not talking about the feeling of confusion, but the confusion that results from the conflicts caused by wrong believing.

More Articles from The Intercessor, Vol 34 No 2

END_OF_DOCUMENT_TOKEN_TO_BE_REPLACED

Words to Live by is a weekly devotional email of Scriptures and quotes that highlight and expound upon our Union with Christ. If you'd like to receive devotionals like the one below, please subscribe using this link. Wednesday June 8, 2022 Revolutionary Truth "Now after the Biblical revelation ... END_OF_DOCUMENT_TOKEN_TO_BE_REPLACED