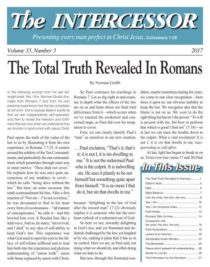 Romans Tells Us How
by Norman Grubb

In the following excerpt from The Liberating Secret, Norman unveils through the Book of Romans the three stages by which God reaches out to blind and hopelessly self-confident man–according to his capacity to receive the truth.

“I write unto you, little children…. I write unto you young men…. I write unto you fathers.” The analogy of human birth and growth make the stages quite plain. These three stages are nowhere more clearly explained and presented to us than in the great Roman letter, and it is there that we will now examine them more closely, always bearing in mind their ultimate goal: that man was originally created and now re-created in Christ to find his place in God and He in us.

The first stage may be called the outward approach. Man has become an extrovert, or at least he seeks to live like one. To look too far within might be disturbing. He tries to live on the surface; work, pleasure, practical interests, social and religious activities, the world’s merry-go-round. So it is from the outside that God approaches him. He can understand a God in heaven; he can see a Saviour in history; he can recognize the sins he himself has committed. On this level, then, the gospel is preached to him. Look at the first five chapters of Romans, where more plainly than anywhere else in Scripture, the way of salvation is presented. First, “the wrath of God is revealed from heaven against all ungodliness and unrighteousness of men” (1: 18). Then the sins of man are exposed in loathsome detail, and attributed to a worship of the creature rather than the Creator (1:21-32). The coming “day of wrath and revelation of the righteous judgment of God” is proclaimed, where doers of evil and workers of good will be judged without respect of persons, and rewards and punishments meted out (2:5-11). No pronouncements could be in plainer language: a child can understand them. The name of the Judge is then given (2:16), and the verdict of guilty on all the world unmistakably foretold, for the simple reason that all have sinned, and “there is none righteous, no, not one” (3:19-23). What an inescapable presentation of facts, which by these statements of Scripture and the word of the preacher have opened millions of blinded eyes! The gospel of free grace is then presented in the same practical; objective and reasonable form. Despite these hard facts of sheer justice, there is a way by which the guilty are pronounced righteous. God found Himself a worthy substitute, and “set Him forth” for all to see at an exact place and on a fixed date: Christ Jesus, was the “propitiation through faith in His blood” (3:24, 25): and faith means not works of self-effort, but simple “believing on Him that justifieth the ungodly” (3:27, 28): to that man, woman or child who so believes, “his faith is counted for righteousness” (4:3-5).

The primitive forest-dweller, the woman in purdah, the little child: or alternatively, the sophisticated town-dweller, hedonist, intellectual, religious, can all understand such facts, if they will. To them all is Christ “evidently set forth crucified.” It is the outward approach. It does not deal with any such matters as our dwelling in God and He in us: it does not draw attention to the ramifications of the self-life, or raise questions of soul and spirit. In those first five chapters of Romans, up to 5:11, no reference is made to an inner relationship to God, except the one statement that “the love of God is shed abroad in our hearts by the Holy Ghost.”

But what a change of emphasis in Romans 6! What does Paul mean when he suddenly alters the emphasis from Christ’s dying to my having died (6:2)? This takes us at once from the objective to the subjective, from the outward to the inward, from the historical to the mystical and spiritual. Anyone can understand the historic fact of the Saviour dying for us, but who can understand the statement that we are dead? Quite obviously, physically speaking, we are not dead! And still less buried, as 6:4 says! Now we are passing on to where man really lives–within himself. We have seen how the natural man will escape the discomfort of looking within himself, if he can; he will live in an external world so far as he can, and God meets him where he lives, with facts and in language he can understand. But, when he has come to Christ, and the Son has been revealed in him as his Saviour, it will not be long before he finds out that the real problems of life are within. At his rebirth, it was his past sins that concerned him; but now he discovers that it is not the sins, but the sinner that must be dealt with. “Shall we continue in sin?” asks the Apostle. He now wants to follow Christ, but what is he to do with all that rises up within to prevent him? There are the lusts of the flesh–sex, greed, sloth. There are the sins of the soul and spirit–pride, resentment, anger, self-pity, jealousy. There are the attractions of the world, the distractions of home and business, the deadness in prayer and Bible study, the powerlessness in witness. He has to face the fact that the joy of sins forgiven, the gift of eternal life, the knowledge of Jesus as Saviour and Friend does not give him the inner release and victory he needs. Often he seems to be still in slavery to sin and self; he struggles, he resolves, he prays; but one besetting sin or another keeps holding the mastery over him.
Paul gives the answer, as no other writer in the New Testament. He was the Spirit’s chosen instrument of the full revelation in Christ. As he said himself, he did not receive it of man, neither was he taught it, “but by the revelation of Jesus Christ.” He leads us now into the second stage of this revelation, the central and vital stage, to which the first was a gateway, and from which the third is a normal and necessary continuation.

He now begins to open up an inner relationship with God. Up to this point, as an extravert, man could only regard himself as quite a separate being from God, even as he is also from his neighbour. I am here, and you are there, and God is way up above somewhere. That is why the Romans 1-5 approach of God to man is only on the external. A true separation came between God and man through the fall, and continues for ever in “eternal exclusion from the presence of the Lord and from the glory of His might” for those who continue in disobedience. So used has man become to this reality in his fallen condition that he usually carries it over to his saved condition, and continues with the grave-clothes of a sense of separation on him. For the saved man this is an illusion, though real enough while still believed in. Thus, though he does know Christ in his heart, he normally regards Him as apart from himself; often outside himself; and sometimes so separate that there appears a great distance between them. Sometimes this specially appears to be so in prayer, or in time of crisis and bewilderment. Very often from our pulpits no nearer presentation of Christ is given to the believer than that He is a Friend close at hand, and so forth. The veil of a false separation is left over the eyes. Here, of course, as we have been showing in these pages, lies the great error. It leaves man to do the very thing he was never created nor redeemed to do, to carry on as best he can by self-effort, helped, he hopes, by the presence and blessing of God.

For most of us this deeper revelation of union has to come as a second experience. We can seldom see our outward sins and inner selves in one single exposure. The plainest proof of this is that the profound exposition of Romans 6-8 is given us separately and subsequently to chs. 1-5. It is not that there are two separate salvations, as it were. There is only one Saviour, one glorious process of restoration through His death, resurrection and ascension, one Holy Spirit. The twofoldness is not on His side. But for most of us there has to be a twofold appropriation of the two great deliverances that stream from the one Calvary, the deliverance from sin and wrath (1-5), the deliverance from sin and independent self (6-8). They could conceivably be experienced together, for both are there for the taking, but an appropriation which produces a real experience of both at the same time, and not merely a mental apprehension, is rare. In that sense there is a “second blessing,” an entire sanctification subsequent to justification, an inner union according to Gal. 2:20.

So we are now passing to the heart of the purpose of God in Christ, the purpose we have seen in earlier pages stretching from the first days of the first creation of heavenly beings up till now, the purpose of union as in the Trinity itself (John 17:21), the joining of Spirit with spirit, now possible for fallen man only through the reconciliation of the cross. Romans 6-8 will tell us all we need to know about it. There are no more important chapters in the Bible for the believer who seeks the solid foundation of the fullness of life in Christ.

A connecting link between the external teaching of Romans 1-5:11 and the internal teaching of 6-8 is in the intervening 5:12-21. Here is a first inkling that we must look deeper for the cause of our troubles and for their remedy. We derived something from Adam–sin and death–there is a hereditary link between us. So now we derive something from the first-born of this new creation, if we belong to Him, a hereditary link of righteousness and life. “As in Adam all die, even so in Christ shall all be made alive.”

In God’s sight we were all in the loins of the first Adam, and therefore participated in the process of his fall–in sin, separation from God, and death (cp. Heb. 7:9, 10). In God’s sight all who are joined by faith to the last Adam are equally in His loins, and so participate in the process of His redemption–in death to sin, in resurrection to newness of life in the Spirit.

More Articles from The Intercessor, Vol 33 No 3

END_OF_DOCUMENT_TOKEN_TO_BE_REPLACED

Words to Live by is a weekly devotional email of Scriptures and quotes that highlight and expound upon our Union with Christ. If you'd like to receive devotionals like the one below, please subscribe using this link. Wednesday January 18, 2023 Spontaneous Living "We can listen to the law, know ... END_OF_DOCUMENT_TOKEN_TO_BE_REPLACED