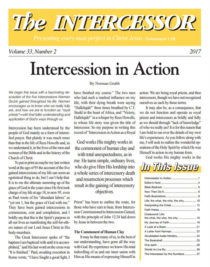 Life: The What, The Who, The Why–Part Two
by Page Prewitt

We continue our excerpts from Page Prewitt’s booklet, copies of which are available in our online store.

Satan Was Our Boss
We enter life with our human spirit joined to the spirit of error, or Satan. As unfamiliar as this idea may be to you, please take note because it is cutting edge truth. Until we are born again, we are Satan-bossed and sin (All have sinned–Rom. 3:23) for us is a way of life: Wherein in times past ye walked according to the prince of the power of the air, the spirit that now works in the children of disobedience (Eph. 2:2). Our sin does not have to be some dreadful transgression. The slightest infraction, like a white lie here and there or some slight selfish act, is all it takes. The good news (and that is why the Gospel is called the good news) is that when we accept Christ as our Savior, the Holy Spirit joins Himself to our spirit and we become one spirit with Him: But he that is joined unto the Lord is one spirit with Him (1 Cor. 6:17). He then is our boss or operator and through us He expresses His nature. Thus we are total humans who become one with a Total God.

Another equally important component of the Total Truth is that everything and everyone in the universe, whether saved or lost, is and always will be 100% dependent on God, the creator and sustainer of all things: In him we live and move and have our being (Acts 17:28). And as strange as it seems, this includes Satan. In light of this truth, we conclude that there is no such thing as anyone being independent of God or, to put it another way, being an independent self.

Nonetheless Satan (created Lucifer, God’s Light Bearer), driven by pride and ambition, made the calculated choice to act as though he was independent. He chose to reject God’s authority over him and defiantly declared himself equal with or independent of God: I will be like the Most High (Isa. 14:13, 14).

This statement is the foundation of Satan’s sin. His transgression became full-blown when he moved from thoughts and words to deeds, his deeds being his self-love and in turn, his rejection of God who is self-for-others love. By doing this, Satan opened the dark side of God and became the opposite of Him–total self-for-self. The God-given consequence for Satan’s sin was that he and his angels became enemies of God and were cast out of heaven forever.

“I”–the Original Sin
Satan began his sin infiltration into the human race when he tempted Eve with the following lie:

“You will not surely die,” the serpent said to the woman, “For God knows that if you eat of it your eyes will be opened, and you will be like God, knowing good and evil” (Gen. 3:4, 5).

Eve turned her back on God and believed Satan and trusted him instead. I can imagine she said something to this effect: “I” am free; “I” will do as “I” please. (Notice here how she speaks of herself as being independent or an alone I). Her unbelief manifested itself, as it always does, by Eve putting her trust in herself as though she was a self-operating self. As a result, she ate the forbidden fruit and persuaded Adam to do the same.

When the woman saw that the fruit of the tree was good for food and pleasing to the eye, and also desirable for gaining wisdom, she took some and ate it. She also gave some to her husband (Gen. 3:6).

This act of disobedience changed the world forever. Death, both physical and spiritual, began on planet Earth. The personal consequences to Adam and Eve were that God removed them from the garden, and they took Satan’s evil, self-for-self, sinful nature into their spirit. At this point Satan took their spirits captive and became their operator. All mankind after Adam inherited this evil self-for-self Satan nature and came into the world lost.

Wherefore, as by one man sin entered into the world, and death by sin; and so death passed upon all men, for that all have sinned (Rom. 5:12).

And you hath he quickened, who were dead [lost] in trespasses and sins; Wherein in time past ye walked according to the course of this world, according to [Satan] the prince of the power of the air, the spirit that now worketh in the children of disobedience (Eph. 2:1, 2).

We all remain in this lost state unless or until we accept Christ as our personal Savior, and we become, in biblical terms, saved or born-again: Truly, truly I say to you, unless one is born again, he cannot see the kingdom of God ( John 3:3).

A glorious thing happens to us the moment we accept Christ as our Savior and become born-again: we are cleansed of all our sins by Jesus’ shed blood, and His body death cuts us off from the indwelling spirit of error (Satan). In return, the Holy Spirit joins Himself to our human spirit. From that instant we are forever united with Him in an eternal union.

Our Human Makeup
Hopefully the following illustrations will help show what I mean.

These diagrams give a very simple picture of our human makeup. As you can see in the first diagram, our human spirit is represented by a lower case “s” along with the plus sign which connects it to Satan. This makes very clear the biblical fact that having inherited Satan’s nature from Adam, we are all born joined to him, and he is our boss. The Lord Jesus is the only exception. He was born sinless, lived sinless, and died sinless.

Continued in the next issue…

More Articles from The Intercessor, Vol 33, No 2

END_OF_DOCUMENT_TOKEN_TO_BE_REPLACED

Words to Live by is a weekly devotional email of Scriptures and quotes that highlight and expound upon our Union with Christ. If you'd like to receive devotionals like the one below, please subscribe using this link. Saturday December 25, 2021 Merry Christmas from The Intercessor! "Jesus lived ... END_OF_DOCUMENT_TOKEN_TO_BE_REPLACED