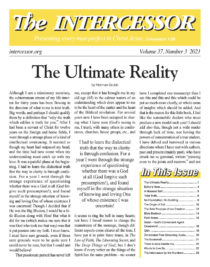 “Where there is neither Greek nor Jew, circumcision nor uncircumcision, Barbarian, Scythian, bond nor free: but Christ is all, and in all.” –Colossians 3:11 (King James Version)

The heart of the stabilizing revelation to me, and what has become the total answer to all life for me, has been that there is only One Person in the universe, and that the whole universe is His myriad forms of Self-manifestation. Of course I am immediately dubbed a pantheist and am often asked if I am. Those who ask that either don’t understand what a pantheist is or don’t understand what I am saying about my own beliefs. A pantheist, according to its Greek derivation, means that everything is God. I am saying that everything is a form by which He manifests Himself, much as my body is not exactly I, but an outward form of the inner me. This fact, gleaned through Boehme, confirmed through the writings of many others, and with the foundations of the Scripture, has given me my anchor. It has moved me on from my separated concepts, and this I think is the weakness of evangelical teaching, of a God apart from His creation “making” His creation, much as a carpenter appears to be apart from the table he makes.

So He as the author of the universe is the inner life of it. He “fills heaven and earth,” therefore, is within them. He is to be finally revealed as what He really is—All in all, which leaves nothing but Himself. “The beyond in the midst,” the Transcendent in the Immanent. And as the One Person in the universe, He can only manifest Himself as a Person by persons. So Jesus lived His human life, as the archetypal man, by the Father dwelling in Him (John 14:10), which was the startling surprise to His disciples who, in their separated human outlook, expected an external revelation, when they asked Him to show them the Father. And He went on to say that this was why He had come as redeemer, so that God the Spirit who was in Him would be God the Spirit in an inner unity with all who receive Him. And that was Pentecost; not the outward manifestations which were but a means; but the end—an inner fixed consciousness of their union with Him—He in them—they in Him.

–Once Caught, No Escape

END_OF_DOCUMENT_TOKEN_TO_BE_REPLACED

Words to Live by is a weekly devotional email of Scriptures and quotes that highlight and expound upon our Union with Christ. If you'd like to receive devotionals like the one below, please subscribe using this link. Wednesday November 16, 2022 What about sin and temptation? "What about sin and ... END_OF_DOCUMENT_TOKEN_TO_BE_REPLACED