You are here: Home / E-Books / To All Believers…It’s as Simple as This / No Such Thing as an Independent Self
Share this...

No Such Thing as an Independent Self 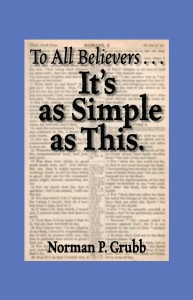 Now we see this great fundamental truth that there is no such thing as an independent self, for there is only One Self in the Universe; for Lucifer, now called Satan, was self-deceived into imagining he was independent. In actual fact, he forever remains God’s convenient agent, fixed in his negativeness. Cast out of heaven, God uses him in His vitally necessary preparation of what He had planned from before the world’s foundation—to have a vast company of sons, created persons like Himself, by whom He would manage and develop by inheritance the universe, together with His Son (Heb. 1:2; Rom. 8:14).

These sons must come to their consciousness of being persons by being confronted with these same necessary opposites. So, while given all God’s riches of goodness in the Garden, there was one tree they must not touch or they would the to their created privileges as His sons. God intended and purposed, by the fact of the presence of this cast-out devil in the form of a wily serpent, to entice these first two, Adam and Eve, to choose Satan’s self-for-self way and take what Eve was deceived into thinking would be beneficial to herself, though against the word of her Creator. By this means, the human family would learn to its depths the opposite nature, not ours, but the nature of the “god of this world.” This happened to them by receiving and eating of that false fruit, just as it was said that, to partake of the other tree, the Tree of Life, and eat its fruit would mean receiving eternal life (Gen. 3:22), showing that fruit to be symbolic of receiving Christ, our eternal life. Eating the false fruit meant receiving this opposite form of life which is really death, the nature of self-for-self. Paul describes in Ephesians 2:1-3 how that becomes a fact of us fallen humans, expressing, not a nature of our own (of which there is no such thing) but the nature of our false father, expressing his lusts. And Jesus turned the spotlight on that fact when He told the self-righteous Pharisees (of whom we all were in our Satan-indwelt days), “Ye are of your father the devil and the lusts of your father ye will do” (John 8:44). Thus, Jesus exposed once for all that, we humans by our faculties and appetites never have had a nature of our own, but either “take their nature from God and are His children,” or “take their nature from the devil and are his children…” (1 John 3:10, Amp.). Therefore we were expressing Satan’s lust nature in all its forms (the works of the flesh), which were not ours but his. In our fallen days we readily cooperated (“the lusts of your father ye will do”). He, Satan, was the sinner, but we were wholly accessory to the fact and were headed for a like destiny.

But here we see the subtle deceit of the devil, which is our vital spot in our coming to a final understanding of who we really are. Satan deceived us into thinking that we are independent selves, even as he deceivedly thinks he himself is. Revelation 12:9 is a key Scripture on this, showing that Satan’s chief operation is “deceiving the whole world”—making us think we are who we are not. We think we are committing those sins, being possessed by those lusts and negative responses, and we are deceived. They are his expressed by us. He imparts that deceit into us as if it is us, but it is he masquerading as us.

And God’s sole purpose is to expose this lie of independent self. Because we are God’s sons and His means of expressing Himself in the universe, we have to learn and drink to its bitter depths that great lie of the independent self—that lie of the Author of Lies with which he himself is self-deceived. The fact is we can always transmit what we are or think we are, and so Satan did that transmitting to us, his fellow creatures, and we all normally think we just run ourselves, do our own things (Is. 53.6), make up our own minds and “naturally” operate as self-relying. The Lie! We have to learn and experience it as The Lie, so that once really seen as The Lie and the remedy in Christ, we shan’t be fooled again. We may slip by temptation (we speak later of this), but we know our slip and how to return. We thus become not only saved, but safe sons. Once bit, twice shy!

END_OF_DOCUMENT_TOKEN_TO_BE_REPLACED

Words to Live by is a weekly devotional email of Scriptures and quotes that highlight and expound upon our Union with Christ. If you'd like to receive devotionals like the one below, please subscribe using this link. February 12, 2020 "The illustration that settled me into seeing my proper place ... END_OF_DOCUMENT_TOKEN_TO_BE_REPLACED