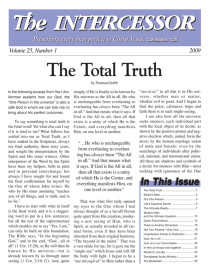 The Total Truth
by Norman Grubb

In the following excerpt from Yes, I Am, Norman Grubb explains how our God, the “One Person in the universe” is also a safe God in whom we can fully rely to bring about His perfect outcomes.

To say something is total truth is the final word! Yet what else can I say if it is total to me? What follows has settled into me as Total Truth, as I have soaked in the Scriptures, always my final authority, these sixty years, and sought the interpretation by the Spirit and His inner witness. Other interpreters of the Word by the Spirit have been my helpers, both in print and in personal interchange; but always I have sought for and found the final confirmation for myself by the One of whom John writes: He who by His inner anointing “teaches you of all things, and is truth, and is no lie.”

I have to start with what in itself is the final word, and it is a staggering word to put in a few sentences; but all the rest of the superstructure which enables me to say “Yes, I am,” can only be built on this foundation. The Bible says, “In the beginning God,” and in the end, “God . . . all in all” (1 Cor. 15:28), as He will then be known by His universebut is already known by us through inner seeing (1 Cor. 2:10-12). And, quite simply, if He is finally to be known by His universe as the All in all, He who is unchangeable from everlasting to everlasting has always been “The All in all.” And that means what it says. If God is the All in all, then all that exists is a unity of which He is the Center, and everything manifests Him, on one level or another.

That was what first truly opened my eyes to the One whom I had always thought of as a far-off Person quite apart from His creation, producing a new seeing of Him, who is Spirit, as actually revealed in all created forms, even if they have been distorted from their original harmony. “The beyond in the midst.” That was a vast stride for me, for it gave me the “single eye” which Jesus said will fill the body  with light. I began to be a “see-through-er” to Him rather than a “see-at-er,” in all that is in His universe, whether man or matter, whether evil or good. And I began to find the poise, calmness, hope and faith there is in such single-seeing.

I see also how all the universe seeks oneness, each individual part with the local object of its desire: as shown by the positive proton and negative electron which, united, form the atom; by the human marriage union of male and female; even by the searchings of individuals after political, national, and international union. All these are shadows and symbols of a desire for oneness with Himmost seeking with ignorance of the One with whom they seek union. But millions of us today are the privileged ones who have found that blessed oneness: Christ the Head and we the body. Jesus’ prayer is being answered: “That they    all may be one, as Thou, Father, art in Me, and I in Thee, that they also may be one in Us.” And this right through to the final consummation we thrillingly await . . . the marriage supper of the Lamb, whose bride, ourselves by grace, “hath made herself ready.”

We can know our oneness with Him, for as He is Spirit we also are spirit. Jesus had said to the woman of Samaria, “God is Spirit”; and we too are spirits, for He is called “the Father of spirits.” So spirit is self: He the “I am” Spirit, and we created spiritslike Father, like son. As spirit-self, I know;  Paul said, “What man knows the things of a man,  save the spirit of man which is in him?” As spirit-self, I love; for God is love, and we too all show love, whether rightly or wrongly applied. And as spirit-self, I will; just as He “works all things after the counsel of His own will,” so I have my freedom of will. This freedom was the first evidence of Adam being a person, in the Garden of Eden. So to be a created person in the image of the Creator is to be spirit as  He is SpiritHe infinite and I finite; and I as spirit have knowledge, love and will. I know, I love, I choose; and my soul and body are the external agents of my choosing spirit.

He who is Spirit is He who is love. By the Scriptures, which reveal Him as love in the giving of His Son that we might have life, we know that His love is total self-giving love. He is the eternal Person-for-others. The reason why He is solely other-loving love rather than self-loving love we will see later. But its unchangeable consequence is that this universe becomes to us a safe and perfectly controlled one when we know that He manifests Himself solely in His other-love activities. We know that other-love can only be harmonious love, in which all that has its source in Him who is lovewhether animate or inanimate, on every level of existence from the sub-atomic upwardscan only operate in “temperature” (Jacob Boehme’s term for normality or harmony) when each is “loving” the other; and to this the universe is coming.

But how full of contradiction to this is our present experience! We live in a world where self-love is the basic motivation. It seems we are in an inextricable chaos from which we can find no way outunless it were possible that all humans so love one another that we put the interests of others before ourselves, a condition which, we know, to the natural man is an unattainable ideal. Butsurprise of surprisesthe ideal has its reality. We who are born of the Spirit, joined to the Lord in one spirit, are loving one another! The eternal kingdom of love is already in evidence for those who have eyes to see it.

The world may point at Christians who don’t appear to love one another, but the world-wide brotherhood of those who do love one another is a visible fact today, which can’t be suppressed or obliterated; and we are part of it. One of the followers of Francis of Assisi said in those days to some who sought to water down his ways of perfect love: “There is an element in the gospel of Christ so disturbing that the world will forever reject it, but never forget it; and the Church will waver forever between patronage and persecution. Yours is the present, for the world will ridicule or crucify us; but I think the future is ours.” And he was right. That “element” is alive in millions today, of whom we are a part; and we are going to see again in these pages the marvels of the way by which this has become our total reality.

So here we start with our Total: God Himself, in ultimate fact the only Person in the universe. God is Spirit (hence we know Spirit is Person), and God is love (and that means He is other-love). And part of this Total we, the redeemed, have now become in our union with Him.

More Articles from The Intercessor, Vol 25 No 1

END_OF_DOCUMENT_TOKEN_TO_BE_REPLACED

Words to Live by is a weekly devotional email of Scriptures and quotes that highlight and expound upon our Union with Christ. If you'd like to receive devotionals like the one below, please subscribe using this link. Wednesday May 18, 2022 Vessels Don't Improve "The final illustration that ... END_OF_DOCUMENT_TOKEN_TO_BE_REPLACED