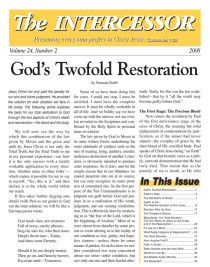 The Necessity of Doubt
by Norman Grubb

We can prove nothing. The wise of this world may be able to shoot holes in our logic or reasons. We readily grant that the One in whom we now have put our faith is unknowable to the world, invisible, and we can never say we know or see Him except by faith. Historic facts are available, but again we admit that history is unprovable. We have only the word of the historians or eyewitnesses. We have no ultimate grounds upon which to base our belief in the reliability and infallibility of the Bible; indeed plenty can be brought against it. We further admit that certain facts concerning the life and death of Christ are altogether beyond human probabilities–His deity, His incarnation, His physical resurrection, His ascension. Pile question mark upon question mark, we admit all. But faith has nothing to do with these. Faith is itself from the Other Side, and is as inexplicable and absurd as that in which it believes. Faith has nothing to say for itself beyond the bare statement that from certain inward convictions which are convictions to it, it stakes its all on God as truth in His revelation through the Bible and supremely the Christ of the Bible. For myself I have stated the two main convictions which constrained me forty-seven years ago to gamble my life on God: first, what was the obvious, that I was a 100 per cent self-centered person; and second, that God was the wholly opposite, 100 per cent self-giving, so that He actually gave Himself in the Person of His Son to change me into His likeness. That final fact convinced me. I said I could follow to eternity a God who is forever the Servant of His own creation, even to the point of giving His own life for His enemies; and I could wish for nothing higher than that such a Person could and should live that same quality of life through selfish me. And so say I to-day.

Faith is built on doubt. Doubt is its lifeblood. Don’t let us be mistaken about that. Faith is doubt absorbed, doubt conquered. Unbelief (unfaith) is doubt accepted. Unbelief is an act of will as much as faith. Doubt is not an act of will, but is the only attitude we humans can have towards anything external to us until we decide whether to accept it or reject it. The uncertainty, the doubt, is the very element which gives stimulus and passion to the decision.

Every smallest action is conquered doubt. You eat food. How do you know it won’t poison you? You sit on a chair. How do you know it won’t collapse under you? You go to visit a certain home. How so you know it will be there when you get there? Action, therefore, on every level is conquered uncertainty. You make up your mind that there is every possible likelihood that a thing is what it appears to be and will react as you expect it to, and then you act–by faith. The more uncertainty there is, the more passion in your decision of faith, for there has been a bigger doubt to conquer.

END_OF_DOCUMENT_TOKEN_TO_BE_REPLACED

Words to Live by is a weekly devotional email of Scriptures and quotes that highlight and expound upon our Union with Christ. If you'd like to receive devotionals like the one below, please subscribe using this link. Wednesday August 4, 2021 Come to the light "'This is the condemnation, that ... END_OF_DOCUMENT_TOKEN_TO_BE_REPLACED