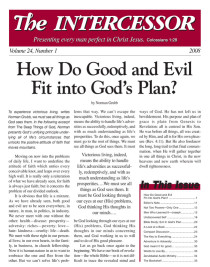 Joseph is the perfect example, outside the Saviour Himself, of the trained servant of the Spirit. He, too, like the One he prefigured, "learned obedience through the things he suffered." He had to learn. All have to learn. There is no shortcut. Learning obedience means learning that we were never created for independent action, to be self-acting selves, but for submission, to obey and to love and obey: and learning that this is made wonderfully actual by the Spirit of obedience living within us, the Spirit of Him who "became obedient unto death, even the death of the cross."

All this is wonderfully seen in Joseph. Pure in youth, taking a lonely stand against sin in the family circle, he boldly declared the revelations God gave him, amidst hatred and envy from his brethren, for the word of faith always sounds like boastfulness to the natural ear. Only his father Jacob, who well knew that Voice himself, senses its authenticity in those dreams and recognized the chosen vessel. How did Joseph think they would be fulfilled? Could anything have been further from his thoughts than captivity in a foreign country, slavery and the dungeon? Could a believer’s progress ever be more sharply downward than his? How did Joseph think they would be fulfilled? How did he retain his faith and not become an atheist? Sold as a slave by his own brothers despite his pitiful entreaties, bought and put to work in an Egyptian officer’s household, what had God and His supposed revelations to do with all this? But "the Lord was with Josephand his master saw that the Lord was with him." That does not happen to the rebellious man. Every indication is that Joseph, distressed and mystified, bowed the neck to God’s will. He learned the first lesson of obedience. God was his circumstance, God his environment: it is not in self to order our outward way aright; our very enemies are carrying out God’s plan for us.

But, as with Abraham, the test on the body must go to the limit. If this young man was to be next to the king in the wealthiest nation on earth; if he was to live right in a world of luxury, profligacy and idolatry, and yet not be of it, a stranger and pilgrim unspotted by the world, the one pure light in a great darkness, he must most surely be lust-free and heart-free both from "the pleasures of sin" and "the treasure in Egypt," from which even the great Moses had to flee. So there came to this lonely young man in the full bloom of his youth this subtle and continuous temptation, so flattering to his pride and so alluring to his flesh. Could any but a God-indwelt young man have resisted it? Listen to his answer to her. It would be a horrible breach of trust towards his master, a great wickedness, and finally, and the words were addressed to his heathen temptress, a sin against God. It was the answer of a firmly dedicated heart: the matter was settled for him; his body was not for fornication, but for the Lord, and the Lord for the body. The battle for the body was finally won.

We can hardly imagine the scene on the return of his trusting master, when he believed the wicked lie of his wife. His disappointment: his rage; Joseph’s distress and helplessness: the arrest, the blows stick, the dungeon, the feet hurt with fetters, the iron entering his soul. We do not think on this occasion that the bodily distress was of first importance; Joseph had become accustomed by now to those kinds of hardships. It was into his soul that the iron sank, says the Scripture, when they hurt his feet with fetters (Ps. 105:18 marg.). His mind was assaulted. As he had learned that his Lord, not self, was the owner of his body and director of his circumstances, so now he must discern between the mind of self and the mind of the Spirit: God must also be the God of his soul-life. Did he doubt the authenticity of those boyhood dreams He had good cause to. How could he prove they were not just ambitious daydreams? But once again, there is no evidence that he wavered in faith. The test and proof of this came without warning one morning when he found the imprisoned butler and baker distressed because no one could interpret their peculiar dreams. Without hesitation Joseph said to the, "Do not interpretations belong unto God?  Tell me them, I pray you." Could he have done that if he harbored secret doubts about his youthful dreams? Did it not mean not only that God gives interpretations of dreams, but that God gives them to him? Not just that God can, but that God does through him. This was the proof of union. He knew the difference between his human thoughts and the thoughts of the Spirit within him. As he was tested on his body and material circumstances, so he was on his soul, and in both cases he came through unscathed; he seemed to demonstrate that, where most of us have to learn our nothingness by our failures and that only God in us is the victory, Joseph knew this from his youth and was able to walk in it. It seems as if he was one of those rare souls that went through his wilderness education with a Canaan experience!

Yet two more years passed in silence. Had God forgotten to be gracious? Was His mercy clean gone for ever? We ask that, but Joseph did not; for if there had been doubts in his heart he never could have answered that sudden summons to appear before Pharaoh himself, with only just time to shave and change his clothes. There he stands before the whole court, asked by Pharaoh to interpret the dream, confronted with the failure of the whole body of the magicians to do so, yet perfect master of the situation. What is in us comes out in a crisis. There is not time then for pretence and build-up. But Joseph’s secret is plain to all that read. He walked in pure light. He knew the inner bond between empty self and mighty God. The difference between the mind of the flesh and that of the Spirit were unmistakable to him. So when Pharaoh said to him, "I have heard say of thee, that thou canst understand a dream to interpret it," like a flash Joseph answers, "It is not in me: God shall (not God can) give Pharaoh an answer of peace." No impudent boastful claims here, or what would be much more likely in a person uninstructed in the ways of the Spirit, fearful, falsely humble disclaimers; but the clear calm statement of the man with the Holy Ghost, I can’t, but God can, and will through me; till at the end Pharaoh is saying, "Can we find such a one as this, a man in whom the Spirit of God is?"

One more necessary test came to Joseph, a test of his inner self, his spirit. Prosperous, powerful, busy, it looks as if even the reality of those first dreams faded, for he named his first-born Manasseh, "for God hath made me forgetall my father’s house." Then, one day he was face to face with his brethren, the ones who had hated and sold him! What was found in that pure spirit? Vengeance or sentimentality? Summary justice or superficial forgiveness? Vengeance was not there, not a trace of it; the dream came back to his memory, it says, and doubtless a great thrill at this marvelous proof of God’s faithfulness; but his vision in the spirit had progressed far beyond that. His delight was not in the sight of his brethren doing obeisance to him. No, he saw with God’s eyes, that all the years of his suffering and exile were the working out of a plan of transcendent wisdom: "Be not angry with yourselves; for God did send me before you to preserve lifeYe thought evil against me; but God meant it unto good." It was not for his glorification, nor for his position of power, but that the plan of God through the ages, the promises to Abraham should be fulfilled, "to preserve you a posterity in the earth, and to save your lives by a great deliverance"; and his father Jacob pointed to the still more distant and glorious purpose of it all, when he later said to Joseph, "from thence is the shepherd, the stone of Israel." Such a man had no place in his heart for bitter vengeance. In the wisdom of God he led his brethren to true repentance and acknowledgment of their sin, which he freely  forgave and never withdrew, neither during their father’s lifetime, nor after. It was the heavenly Spirit dwelling in Joseph’s spirit, not now sanctifying his body as the instrument of His great purposes, nor enlightening the mind with revelations of things to come, but loving and saving enemies, and leading them to repentance through a self which was no longer itself, but the dwelling place of God. Where Abraham was called to sacrifice his son, Joseph was called to forgive his enemies by the same God that worketh all in all.

More Articles from The Intercessor, Vol 24 No 1

END_OF_DOCUMENT_TOKEN_TO_BE_REPLACED

Words to Live by is a weekly devotional email of Scriptures and quotes that highlight and expound upon our Union with Christ. If you'd like to receive devotionals like the one below, please subscribe using this link. February 12, 2020 "The illustration that settled me into seeing my proper place ... END_OF_DOCUMENT_TOKEN_TO_BE_REPLACED