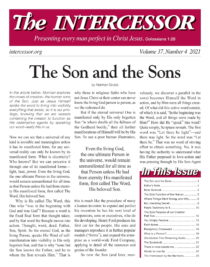 The Son and the Sons
by Norman Grubb

In the article below, Norman explores the crown of creation–the human sons of the Son. Just as Jesus Himself spoke the word to bring into visibility everything that exists, so it is our privilege, knowing that we are vessels containing the creator, to function as His redemptive agents by speaking our word—really His in us.

Why is He called The Word, this One who “was in the beginning with God and was God”? Because a word is the fixed final form that thought takes; and by that word the thought moves into action. Thought, word, deed. Father, Son, Spirit. So the eternal God, as the living Person, speaks His Word of self-manifestation into visibility in His only begotten Son, and that is why “none but the Son knows the Father, and he to whom the Son reveals Him.” That is why those in religious faiths who have not Jesus Christ at their center can never know the living God person to person, as we the redeemed do.

But if the eternal universal One is manifested only by His only begotten Son “in whom dwells all the fullness of the Godhead bodily,” then all further manifestations of Himself will be by His Son. To use a poor human illustration, this is much like the procedure of many a human inventor: to expand and perfect his invention he has his next level of cooperators, sons or executives, who do the developing. Henry Ford produces his first car for the people. His sons and managers reproduce it in further popular models (“forms”), and expand the enterprise as a world-wide Ford Company, applying in detail all the resources and genius of the founder.

So now the Son (and later, marvelously, we discover a parallel in the sons) becomes Himself the Word in action, and by Him were all things created. Of what did this active word consist, of which it is said, “In the beginning was the Word, and all things were made by Him?” How did He “speak” this word? Quite simply, Scripture reveals. The first word was “Let there be light”—and there was light. So the word was “Let there be.” That was no word of striving effort to obtain something. No, it was having the authority to understand what His Father purposed in love-action and was pressing through by His Son-Agent into further detailed manifestation. So the Son, the Word, makes a declaration of what we now call faith, which was also a command, “Let there be….” The word of faith. This meant that the Father-Spirit, who is the eternal substance, would now come into purposed manifested “forms” of Father-love, channeled into visibility by the Son as His creating Agent. “And there was light.”

We are here getting a first glimpse, from the very beginning of the Bible record, of how faith works; in other words, the ease of true praying. The Son (or sons) has (and have) an inner understanding of the love-purposes of the Father. The Son then fulfills His prerogative of being the One who speaks the word and a word, as we have seen, is a person going into action. He authoritatively says, “Let there be” (that same word which Jesus later told His disciples to use, “Say unto this mountain, Be thou removed, and be thou case…”). Faith, as the Scripture says, is substance. “And there was light.”

Here is our first glimpse of how a person functions. A spirit-person, by his inner action of spirit-choice, speaks the word, the decisive word of faith, and that is really the Son interpreting the Father’s revealed love-purpose; and from the Father through the Son, the Spirit Himself, the Third Person of the Trinity, moves into His creating work. At the creation, “the Spirit of God moved upon the face of the waters” and one by one the six “Let there be’s” took visible matter-form.

We have here diverged for a moment to take this opportunity of showing that from the beginning, before the human race was in existence, the only way a spirit-person (which is what we humans are) can function is by that simplest of simple spirit activities—the word of faith.
But now back to Him “in whom are hid all the treasures of wisdom and knowledge.” By Him, with His word of faith, we see all things come into being—those six “let there be’s,” by which the Father manifested HIs Godhead in every form of marvelous visible creation with all its beauties, harmonies, perfection—by His Son. Indeed, we hear God’s recorded comment: “It is good,…it is good,…it is good.” But the consummation of those eight “Let’s” is beyond our conceiving, except that it is revealed as His eternal purpose from before He started the founding of the world. When the eight “Let” is recorded, it states: “And God said, Let Us make man in Our image.” The Father, Son, and Spirit converged in Their final summit “Let.” For it was the beginning of a vast race of sons…created spirits in the image of Him, the Creator-Spirit…spirits who were predestined to adoption on the level of sons, to actually be co-sons with co-destiny, co-responsibilities and co-authority. “Fantastic!” our astonished hearts say. It is at such times we fall back on our final authority, the written Word. By what other means could these bold facts be revealed and declared?

So here we move from deity to humanity, to discover how we are lifted to the level of deity, because we are created spirits who can thus totally identify with Him the Spirit, and be His perfect means of Self-manifestation. How could we know what that means and implies if He, the uncreated Deity-Son, had not Himself become fully a human, and exemplified in human living what a normal human being is and how he functions as such? So that John can say, “Because as He is, so are we in this world”—not ought to be, but are!

Then if at this juncture we now take the big leap into the eternal destiny of the human sons as brother-sons of God with the Son, we are quietly told, “If children, then heirs; heroes of God, and joint-heirs with Christ.” We then quite rightly ask, “What is the inheritance?” And the answer comes back, “The Father has appointed the Son as heir of all things,” and that must mean the universe. Again fantastic!

And we follow that by asking, “What does it imply, to receive an inheritance?” The simple answer is, “After the first excitement at the news, then comes responsibility!” An heir not only owns, but must manage and develop his inheritance. And God has entrusted His whole universe, in whatever its ultimate mind-boggling developments are, to His Son and sons—ourselves!

Just one thing is obvious. He must know that we are trustworthy; even as Paul caught sight of that when he said, near the end of his life, “I thank Christ Jesus our Lord, who hath enabled me, for that He counted me faithful.” And how can we be trustworthy and counted as such by the living God? Obviously, only when we spontaneously are as He is. Christ is love, as His Father is love; so we as love are then safe managers of the universe because we shall be for its benefit, not it for us. We are then safe, spontaneous other-lovers, as are the Father, Son and Spirit. That is what we are by grace—not (as we shall see) ought to be, but are! Yes, I am.

END_OF_DOCUMENT_TOKEN_TO_BE_REPLACED

Words to Live by is a weekly devotional email of Scriptures and quotes that highlight and expound upon our Union with Christ. If you'd like to receive devotionals like the one below, please subscribe using this link. Wednesday November 16, 2022 What about sin and temptation? "What about sin and ... END_OF_DOCUMENT_TOKEN_TO_BE_REPLACED