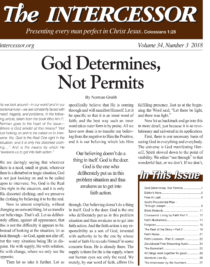 The Rest of the Story–Part Two
by Norman Grubb

In the second part of this two-part article, Norman Grubb describes how a full understanding of union liberates us from the false idea of any change or resources in ourselves.

We have now found that the key to life is, not assistance or partnership, but replacement. Redemption from our sins was not something half and half. It was not we being able to do something for ourselves in getting right with God, and then He helping us out. It was only when we saw we were lost and done for that we found, not assistance, but replacement. His blood for our sins. Now we find that there is no half-way house for ourselves. It is not He helping us to live, and we in partnership with Him: it is He replacing us. His blood in place of our sins, His self in place of ourselves.

We can never stress this too much, because all the burdens, distresses and problems of us Christians have their source in our old, old habit of looking for some ability or enablement in ourselves, and often the exhortations from the pulpit give the same misleading emphasis—you ought to love more, pray more, be better, etc., then feeling desperate because it isn’t there: whereas the truth is that, as old tin cans, we don’t look for change or resources in ourselves. This is the point—humanity does not change, but we move over in our inner consciousness to Him whom we contain, who doesn’t change us but is the Changeless All within, and Him we affirm as all we need.

What we have to learn and experience about ourselves and the relationship of humanity to Deity is now completed. They were absolute lessons—the lessons of replacement. They could not be learned without exposure before remedy, and it had to be absolute exposure. There could be no shred of recognition of His blood in place of our sins, or His self in place of ourselves until we had come to the total end of our self-justification, and our own self-reliance; usually these two lessons are learned in succession, the one before we are redeemed, and the other after; and each entails a total brokenness, conditioning us to recognize and accept the total replacement.

With this relationship in clear focus, it is safe for us now to turn around and pay attention to our humanity, and give it back its rightful place. It has been a case of the disappearance of the human self as a background for its reappearance where it really belongs. We never were, of course, pots but persons. But we had first to know, and know for ever our pot relationship—that it is the exclusive He and never we, and we not becoming something but containing Someone. When we have so learned this that we shall never depart from it, but know we are vessels for ever, we the creature, He the Creator, neither one ever becoming the other, nor mixing in that sense, then we are free for the right form of self-affirmation and the total uninhibited activities of the liberated self.

Our discovery, then, is that our actual relationship with God is not that of vessels containing Him, but of a unity, Person with person, which could not be possible between two inanimate entities, such as a vessel and what it contains. Indeed, in this sense, the vessel analogy, if regarded as a complete illustration, is misleading, because it can leave us with the mistaken impression that our relationship with God is variable, just as a cup may contain liquid at one moment and be emptied at another; whereas the real truth is an indivisible union, in which there can be no such thing as sometimes a fullness, sometimes emptiness, or a partial filling. When we feel like that or believe it, we are accepting an illusion.

The analogies of the union given by Jesus and Paul are likening our relationship to Vine and branch, Head and body. In each case they form a unity. When we look at a tree, we do not divide in our minds between trunk and branches, we see one tree—a unity. Equally a head and body form a unity, and we regard them as such. When we see people, we do not see so many heads and bodies: We see just persons—a unity. We do not even speak of a union, which directs the attention to two coming together to make one. We speak of a unity where the two have become one. So it is with the Trinity and us.

Now we come to what we have already seen to be God’s sole purpose in Christ dying and rising, and we with Him: the destruction in death of the old union with “the spirit that worketh in the children of disobedience,” and the union in resurrection with “the Spirit that raised up Jesus from the dead”—God Himself: and the union has produced the unity. This has been the fact in all of us since in our need and in our freedom, we saw, believed, and received the Christ of God. From that moment (whether specific or dateless) the unity was a fact. He had joined Himself to me and I was joined to Him. As Paul said, “He that is joined to the Lord is one spirit.” In that unity, He has become the real I, again as Paul wrote, “I live, yet not I, but Christ liveth in me.”

In other words Paul did not say that he and Christ lived side by side within him, as if it was, “I live and Christ lives in me”: but that though he was a living human, as much after conversion as before, yet the real Paul was no longer himself, but another Self in his place: “I live yet not I, but Christ lives in me.” The real Paul was Christ walking about and talking, just as Paul wrote in another place, “Ye are the temples of the living God; as God hath said, I will dwell in them and walk in them.”

That is why Jesus had said, “Ye are the light of the world,” not “You have the light.” If we have a thing, it is not we, but just something we hold in our hands, as it were. But Jesus did not say, “You are darkness, but you have me who am light.” He said, “You are light.” But how could that be when we are darkness and he is the light? Unity. Because he and we are one, therefore, he says, “You are the light.” That is why John wrote, “If we love one another, it is God dwelling in us and his love perfected in us.” Our loving is really He loving by us. Again unity.

More Articles from The Intercessor, Vol 34 No 3

END_OF_DOCUMENT_TOKEN_TO_BE_REPLACED

Words to Live by is a weekly devotional email of Scriptures and quotes that highlight and expound upon our Union with Christ. If you'd like to receive devotionals like the one below, please subscribe using this link. Wednesday January 18, 2023 Spontaneous Living "We can listen to the law, know ... END_OF_DOCUMENT_TOKEN_TO_BE_REPLACED