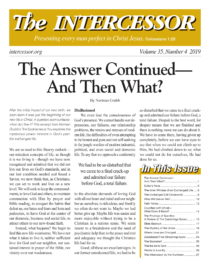 The Inner Witness of an Exchanged Life
by Norman Grubb

As a missionary with C.T. Studd in the Congo along with his wife, Pauline, Norman Grubb soon recognized that he did not have the love, power, and wisdom it took to fulfill his calling. The following excerpt from Norman’s autobiography, Once Caught, No Escape, describes how he discovered the solution to his (and our) dilemma: the liberating secret that we humans were not designed by God to become something but to contain Someone.

A friend of Pauline’s, Dr. Isa Lumsden, was sending her a little paper called The Overcomer, published by Mrs. Penn Lewis, well known in England as a Bible teacher. But what she wrote about didn’t make sense to us. She was not speaking about Christ dying for us, but of our being crucified and dead with Him, and risen with Him. That was all new to us. At first it didn’t register much with us, except that we felt there was something there we hadn’t got hold of yet. But our need was great. We had heard others at Cambridge and other places speaking of knowing that you are filled with the Spirit, especially Barclay Buxton, the father of Alfred, whom we undergraduates were fond of getting down to talk to us. Pauline and I knew that we had no such inner witness, and we desired it. We had one canoe journey to do for some days on the Aruwimi River, a tributary of the Congo, stopping at villages every now and then on the banks. I spent the intervening hours studying a commentary on Romans by an American, I think Stifler by name. Light began gradually to dawn on the meaning of this identification with Christ in His death and resurrection.

Finally, we were out for a visit to a dear and zealous African brother, Bangbani. He was the only light in his chiefdom, and what a welcome he gave us to his little plantation, throwing his well-oiled arms around us so that we came out of the embrace looking like zebras. That night he gave us his best, his cook-shed, with a few banana leaves strung around for privacy, and our two camp-beds in it. The equipment we brought to the Congo and which was our house furniture was a canvas camp-bed each, with mosquito net, a canvas camp table and chair, enamel plates and cups, and cooking pots. That, besides our clothing, which for us men was just khaki shirts and shorts, with stockings or puttees week in and week out–very sensible and comfortable–was the main part of our living necessities.

But when Bangbani left us we could not go to bed. The full moon was out and it was all quiet in the banana plantation except for the usual chorus of insects, with the moon shining between the great banana leaves. So we took the two little camp chairs and sat outside in the moonlight. There is not much trouble with mosquitoes in that area. We had decided together that we would wrestle this thing out with God, and specifically claim then and there that we should be filled with the Spirit. It was only later that we got our theology more in line–to discover that He in His fullness had always been there–His Spirit joined to ours, since we had been born again: and that what we needed was not a filling from outside, but a witness borne to the existing living relationship. We took Galatians 2:20 to be the fact by faith: “I am crucified with Christ, nevertheless I live: yet not I, but Christ liveth in me” and we went to our camp beds around 4 a.m., having accepted the matter as settled by faith. We awoke no different; but I took a postcard and drew a tombstone on it, and wrote “Here lieth Norman Grubb buried with Jesus.” Probably we all have to get settled on the reality of this death experience before the resurrection can be uppermost in our consciousness. At least that was the period I was in.

Nothing further happened to me in relation to this for a couple of years. For Pauline, it was different, and she tells how a few days afterwards, when sleeping alone in a native hut, the hut was filled with a consciousness of His presence and a voice confirming to her that their union relationship was fixed for ever.

Two years later I was at home and visiting this same Mrs. Penn Lewis whose little magazine had first awakened our interest. I had gone to her to talk over our perennial problem of tensions on the field, but I think she must have observed that beneath this I had my own need, for instead of talking about the problem she told me what happened when she had been “baptized with the Holy Ghost,” as she called it, and the power of God had come on a group of young people she talked with that night. As she talked, it was like a great light lit within me, bringing the inner awareness which has never left me since, of Christ living in me; and living in such a sense that it was not I really doing the living, but He in me, in His Norman form. The Scripture against which I had written my name and date that next morning in Bangbani’s village had become permanently alive to me—this great Galatians 2:20.

There was a great deal I had not yet got into focus; those clarifications had to follow later; but one tremendous fact had become fact to me, and the passing years and deepening understandings have only underlined it as the fact of facts—that the secret of the universe, and the key to my own life, is simply the Person Himself in me; as Paul had put it, “The mystery hid from ages and generations but now made manifest to His saints which is Christ in you.”

—Once Caught, No Escape

END_OF_DOCUMENT_TOKEN_TO_BE_REPLACED

Words to Live by is a weekly devotional email of Scriptures and quotes that highlight and expound upon our Union with Christ. If you'd like to receive devotionals like the one below, please subscribe using this link. Wednesday November 16, 2022 What about sin and temptation? "What about sin and ... END_OF_DOCUMENT_TOKEN_TO_BE_REPLACED