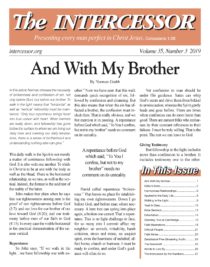 There remains one further stage in revival fellowship, and a most important one. We have so far seen: walking with Jesus step by step; two-way brokenness; cups running over or not running over; walking in the light, letting God show sin as sin; then confession and cleansing in the blood; and finally, as God gives opportunity, giving glory to God by testifying to His dealing with sin and to the power of the blood, bringing liberation to the one who testifies and joy and often conviction to the hearts of the hearers. The one remaining point is MUTUAL EXHORTATION.

The early church was first and foremost a fellowship. They “continued in the apostles’ doctrine and fellowship.” They broke bread from house to house. When they met in worship, it was the very opposite of our present church services, divided into the two categories of preacher and preached-to. It was a living fellowship in action. All took part, and there was such a flow of the Spirit through the believers that Paul had to write words of restraint. “How is it, brethren? When ye come together, every one of you hath a psalm, hath a doctrine…”

Then he urged them to orderliness, and said that if while one was giving his word another arose with a desire to say something, let the first sit down and give place to him, for “the spirit of the prophets is subject to the prophets.”

But today we have to persuade people to say something on those occasions when we have a time of open fellowship! Paul had to persuade them to keep silent and give the other fellow a chance! We have now replaced fellowshiping by preaching in our modern church life, and the reason is not hard to find. Fellowshiping necessitates a real flow of life in the fellowship, for each person has to be ready to contribute his share of what the Lord is really saying to him; preaching is an easy way out for a not-too-living fellowship. Appoint the preacher and let him find the messages; we can sit still and take or leave what we hear, as we please! Probably the best balance was found in early Methodism, where John Wesley laid down that besides the preaching and teaching meetings, there must be a weekly class-meeting which was on a strictly fellowship basis, and all who attended were required to tell of the Lord’s personal dealings that week, whether concerning sins, or answers to prayer, or opportunities of witness.

But in the Scriptures it is also obvious that an important part of this fellowshiping was to be mutual exhortation, not just public exhortation by a preacher but each one exhorting the other. In Hebrews it distinctly says that the reason for such exhortation is to keep each other from becoming “hardened through the deceitfulness of sin” (Hebrews 3:13); in other words, lest our cups should cease to run over and we should not even recognize it. And it was to be daily exhortation! The same is said in Hebrews 10:24-25 about public gatherings. The phrase usually quoted as a summons to attend weekly preaching services, “not forsaking the assembling of yourselves together,” is actually used not of preaching but about mutual exhortation, and “so much the more, as ye see the day approaching.” In James 5:16, also, we are exhorted to mutual confession of sin, especially that we may pray one for another.

In Africa I found these instructions being obeyed in all simplicity, and perhaps that one thing has contributed more than any other to the spread of revival. Those simple revived believers often use unusual boldness in questioning into the lives of those they contact, inquiring as to what is their real spiritual condition and experience of daily victory. Of course, such boldness has also met with intense opposition, and often also criticism, where the questioning might not always have been wise, instead of thankfulness that a few are bold when most of the church is asleep! But it has certainly resulted in a marvelous spread of revival and salvation among saved and unsaved. It has had another healthy effect also. It allows the Spirit to have leadership, and not just some outstanding man. Having accepted among themselves this healthy principle of mutual exhortation, no man or leader is put on some pedestal where he cannot be approached or questioned. All are brethren around one Father, and if the very chiefest among those brethren is seen by the spirit of discernment to be unwise in leadership or to be off color spiritually, others will walk in the light with him.

In other words, the standard is that all want to be the best for Jesus, all recognize how easily deceived we are by Satan and the flesh, so all desire their brethren to “exhort” them, if things are seen in their walk which are not “the highest.” Such exhortations are not easy either to receive or give. To receive them with humility and a readiness to be constantly adjusted before God is one proof of continuing in revival, for where we are not revived we almost certainly resent such challenges and reveal hurt self. To give them in grace and faithfulness costs perhaps even more. We are so easily tempted to “let well enough alone,” or say, “It is not my business,” and so forth, because we recognize that to bring such a challenge might disturb the peace or disrupt a friendship. But in revival we see we are our brother’s keeper not for his sake but for Jesus’ sake. When a brother is not on top spiritually, it wounds the Lord Jesus, it grieves Him, it hinders the working of His Spirit; therefore it is part of our duty to Him to be faithful to the brother. Not to be so is sin.

Of course, such a challenging has to be deeply in the Spirit; that is to say, its source must be godly concern for the brother in question. We must always watch against the subtle danger of using such a method to “put a brother right,” or even “to get our own back.” Thus, it can only proceed from brokenness in ourselves. Indeed, often the only God-sealed approach may be, not the pointing finger of accusation towards the brother, but pointing back to ourselves, perhaps telling him of some reaction in ourselves caused by his conduct, which we have had to take to the cross; or perhaps telling how on some other occasion God had to deal with us through another brother’s faithfulness. The golden rule, as it applies to challenging, is Matthew 7:12, “All things whatsoever ye would that men should do to you, do ye even so to them.”

END_OF_DOCUMENT_TOKEN_TO_BE_REPLACED

Words to Live by is a weekly devotional email of Scriptures and quotes that highlight and expound upon our Union with Christ. If you'd like to receive devotionals like the one below, please subscribe using this link. Wednesday November 16, 2022 What about sin and temptation? "What about sin and ... END_OF_DOCUMENT_TOKEN_TO_BE_REPLACED