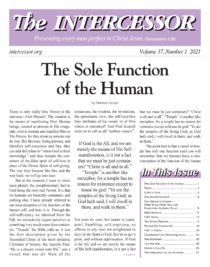 “He is able to save completely those who come to God through him.”
– Hebrews 7:25 (New King James Version)

An intercessor is not “working for God”; he is the human means by which God is doing His own work—and that’s all. The fundamental difference is between the way we “tried” to be God’s servants, when we were still under the delusion that the redeemed man does God’s work for Him and with His help, and the revelation now given us that we are not really we at all, but He in us that He may be He by us. We, indeed, need to have this clear deep down to the center of our consciousness, so that our basic outlook on what we commonly call Christian service has been revolutionized; and we cannot, simply cannot, be caught up again in that frustrating, ulcer-causing, nervous-breakdown-producing rat race of “doing our best for Him.”

Our calling is to activity, non-stop activity, probably more ceaseless and intense activity than in that former way; to a sacrifice that, as with C.T. Studd and so many thousands of others, may bring us the honor of empty pockets, worn-out bodies, lives laid down (and we reckon it the highest honor God could ever give a man when it was said of Jesus, “It pleased the Lord to bruise him”)1. All this is now God in saving action by us, God reaching man through man. The intercessor is commissioned (Isaiah 59:16)2. The intercessor is involved (Isaiah 53:12)3. But all this is meaningless unless the intercessor is also authoritative (Hebrews 7:25)4.
—The Spontaneous You

1 Isaiah 53:10
2 “And he saw that there was no man, and wondered that there was no intercessor: therefore his arm brought salvation unto him; and his righteousness, it sustained him.”
3 “Therefore will I divide him a portion with the great, and he shall divide the spoil with the strong; because he hath poured out his soul unto death: and he was numbered with the transgressors; and he bare the sin of many, and made intercession for the transgressors.”
4 “Wherefore he is able also to save them to the uttermost that come unto God by him, seeing he ever liveth to make intercession for them.”

END_OF_DOCUMENT_TOKEN_TO_BE_REPLACED

Words to Live by is a weekly devotional email of Scriptures and quotes that highlight and expound upon our Union with Christ. If you'd like to receive devotionals like the one below, please subscribe using this link. Wednesday June 8, 2022 Revolutionary Truth "Now after the Biblical revelation ... END_OF_DOCUMENT_TOKEN_TO_BE_REPLACED